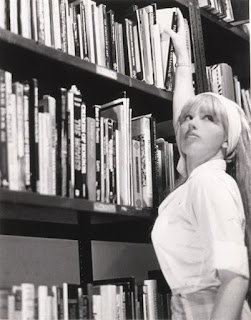 Last May, I had written about Cindy Sherman hitting the all-time record for the most money paid for a photograph at auction, a record which 6 months later was surpassed by Andreas Gursky. Growing up during the 1970s feminist movement, Sherman inevitably made her career with what is now her best-known work, her untitled film series from 1977-80. The work you see here is #13 in the series from 1978 (image: SFMOMA), a less frequently reproduced image, but one which drew me among those on display at the retrospective exhibition of her work currently on at the Museum of Modern Art, which I saw on Friday with my friend JM. Sherman's series of black-and-white film stills are self-portraits posed in seemingly iconic roles from 1950s/60s films. Think Kim Novak in Vertigo or Eva Marie Saint in North by Northwest. (The Hitchcock reference is tacit.) You're positive you recognize the character being portrayed, but in fact there is no such character except in Sherman's mind. So ingrained in us are these character tropes that Sherman's photographs upend our expectations of how women are supposed to be and behave. In #13, a school girl blond reaches up to pull a book off the shelf, a seemingly innocent act, but her look back upward and over her shoulder, away from the book, suggests a back story. Is she in the library or bookstore alone and becomes anxious hearing someone approaching? Is that someone already behind her but out of the frame of the photograph, inciting sexual provocation or possibly even rape? Is there something about the book that makes her feel guilty, like she's doing something she shouldn't? Is she just an innocent school girl or is she really a secret undercover agent about to find the hidden plans for a weapon of mass destruction? Sherman's simple photograph speaks to us in a way that suggests much about womanhood. Indeed, what I liked about this image in particular is that the book she is pulling down is entitled The __cal Dialogue. I have no idea what book that is (I did try to look this up), but the word "dialogue" reveals what her photography is about: the communicative link between the viewer and Sherman as photographer and model.

Feminist art historians have had much to say about how this film series was about the male gaze and the subjugation of women. She has denied that ever was on her mind. Nevertheless, the dialogue that her photographs incite allows for what one "hears" to be as valid as what is being "said." This current retrospective at MOMA explores her photographic dialogue with selections from a number of her series since the 1970s. The exhibition easily could have fallen into the same old category of historical development over time, but the curators cleverly have integrated chronology with themes and series, so that as you move from gallery to gallery you're given an opportunity to reappreciate her work based on how it's been arranged and images across the room speak to one another as a result. I was less familiar with the rest of Sherman's oeuvre, so for me and others this show is a great opportunity to see her whole body of work. Because every photograph is Sherman as some character, you would think it would get boring after a while. After all, how many "self-portraits" can one take in a career? Even JM said that he wondered if part of her work was consciously beginning to parody itself, i.e. photographs of herself posing as herself posing as a character. But her images, at least for the first few rooms, seem to be more about being a woman, about beauty, about the male gaze, about theatricality and showmanship, and so on. And then you enter the room with her large-scale photographs of post-apocalyptic detritus or pornographically arranged mannequin body parts, and you want to vomit. You suddenly realize her work has been about ugliness and the darkness of life, the backside of all the questions of beauty and womanhood that you just spent the previous 15 to 30 minutes pondering. 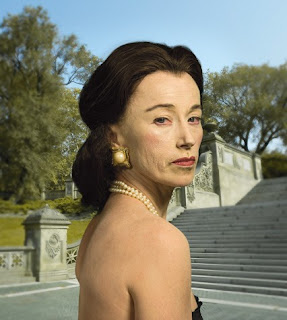 Her history portraits (1989-90) are grotesque but fascinating. Modeled on actual and imaginary masterworks from art history, they are arranged here in one space with rich red walls, conjuring old Salon-style hangings from before the 20th century. The artificiality of the subjects (a Virgin Mary bearing a fake breast that feeds a plastic infant Jesus) calls into question our ideas about what defines a masterwork when its subject matter (religion, parenting, breastfeeding) represents for us topics that are ripe for socio-political debates. Her clown series absolutely freaks me out, but that has to do with my own coulrophobia. Her series of high society women (2008), however, is simply divine (image: #465, MOMA). Showcasing anonymous social matriarchs posing for their portraits, their caked-on make-up, faux backdrops, and stuffed props inevitably ridicule the very idea of what high society prizes in its own standing. At the same time, these photographs are regal, larger than life, and rich in color, leaving you with a vibrancy and sense of drama more delectable than any episode of the Real Housewives of Whatever-City. They are a fitting ending to the retrospective.

You can tell from my review that I enjoyed the show. I appreciated it as an excellent opportunity to see more of Sherman's work in person and to learn more about her beyond the film stills. No one can "like" everything in the exhibition, and I don't think that's the point, although there are some gems in the show. The reproductions I've seen don't do the original works justice, so it is worth seeing them in person to better appreciate them. What struck me most about her body of work, however, is that Sherman is a photographer's photographer. She understands how photography works in its broadest sense as an extension of time-based performances such as theater and film. Her images aren't just about the photographic image on the wall, but all the work that goes into scripting the scenes, finding the costumes, creating the sets, applying the make-up and wigs, and modeling the characters. In the ever-rising debates over how digital cameras are leading to the demise of photography are thrown out here as well, because from early on Sherman has worked to figure out how technology could enhance her finished product, Photoshop just being the latest technological gadget. Indeed, the more I looked at her images, I cared less that they were chromogenic or silver gelatin prints and wanted to know more about her techniques, how she used lighting or staging or even took the pictures without any evidence of the camera in the shot. MOMA could have done a better job explicating her techniques instead of keeping the wall labels so generic. After all, every single one of her works are entitled Untitled, so was it necessary to repeat that over and over throughout the room? Still, the show was interesting and thought-provoking, and I'm glad to have seen it. I wouldn't necessarily say Sherman is my new favorite artist (sorry, Cindy, I'm still stuck on Kara Walker), but this show has helped elevate my respect for her accomplishments in the history of contemporary photography and expand my notions about what defines the self-portrait.
Posted by bklynbiblio at 10:37 AM

You knew I'd have to react to a post on Cindy Sherman. I have an interesting quote in my commonplace book from Matthias Herrmann:

Would my work function at all if it were a mere documentation of my sex life? Does Cindy Sherman sit at home with a clown's mask on her face, rolling around in her own vomit from time to time?
(Matthias Herrmann, in Hotel_tricks (Toronto: Art Metropole, 2006), inside back cover)

Oh, I posted a link to your C.S. post in my Tumblr blog:
http://shermaniac.tumblr.com/

Brilliant! Love the comment. Sherman on Sherman...I knew you'd have something to say.