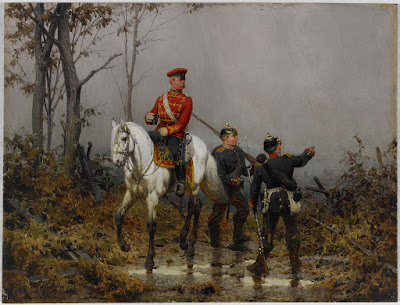 Just when I thought I would be getting back to blogging more regularly, a month went by without a post! October turned out to be an incredibly busy month in part because I had a number of presentations to give, not to mention one major meeting at work and a public outdoor sculpture tour. Earlier in the month the first presentation was part of a small group who got together to thank donors for their assistance helping to take care of and conserve an Old Master painting in our collection. I will blog in more detail about this soon enough, when the official press release comes out, but for now rest assured it was a lovely event and the end-product of the project is fantastic. I gave the art-historical talk at that event, discussing the significance of the painting and its provenance, as well as the general conservation procedure that took place.

On October 15, I was the invited keynote speaker for the 41st Annual Stone Circle Luncheon. The Stone Circle is an alumni group for people who graduated from Columbia Law School more than 50 years ago. I had a lovely chat with one gentlemen who was Class of 1941--and still practicing law! I was invited to speak about the art collection and our object-centered educational initiatives. We had some technological glitches just when I was about to start--fortunately it was not my equipment--but they were resolved finally and the show went on. It was quite an honor to be speaking outside my usual circle of art historians and interacting with a number of senior attorneys and judges--I admit I was a bit nervous to be outside my element, but the response since then has been positive. An extension and variation of that same talk took place last week on the 27th when I was invited to give a talk at my alma mater, the CUNY Graduate Center's Department of Art History. It was partly an opportunity to speak about the work we are doing as a curator of an art collection in a non-traditional environment, but also a general "job talk" of sorts with some advice and thoughts for new graduate students thinking about their own futures. And finally, my last major talk this month was my presentation at the Southeastern College Art Conference in Pittsburgh, about which I blogged and shared the abstract a few months ago when I had received word that my paper was accepted, on portraits, travel books, and diplomatic missions between Britain and Persia during the Napoleonic period. Our panel session was late on a Friday, which is never a good sign, so we didn't have too many people in attendance, but I am feeling like this paper needs to be expanded into an article as it covers some new ground involving politics, travel writing, post-colonialism, and portraiture...so stay tuned for more on that.

Speaking of publications, I want to wrap up this post by mentioning that some of my summer writing projects that have come to fruition. My review of Patrick Horrigan's thought-provoking novel Portraits at an Exhibition (2015) has just been published in the November/December issue of The Gay & Lesbian Review. Also just released this weekend is my article "Portraits, Landscapes, and Genre Scenes: New Discoveries in the 19th-Century Paintings Collection at Columbia University" in the peer-reviewed e-journal Nineteenth-Century Art Worldwide. This article is a free and available to read online, or there is a link at the top of the article to download it as a PDF. I enjoyed working on this article, as it gave me an opportunity to explore three important works from the Columbia collection that represent the different thematic groups of painting that were popular in the 19th century. I worked on a portrait of Byron, a landscape painting by Daubigny (which I also used as the MWA for September), and the painting you see at the top of this post, a military scene by the German painter Christian Sell (1831-1883). This painting only measures about 8 x 10 inches, but it is painted like a precious jewel, and the more I explored the story of what you see in the picture, the more I realized it was not just another genre scene but a rich nationalist statement associated with the aftermath of the Franco-Prussian War. No spoilers though, You have to read the article for yourself.