Polychromy and Its Environments 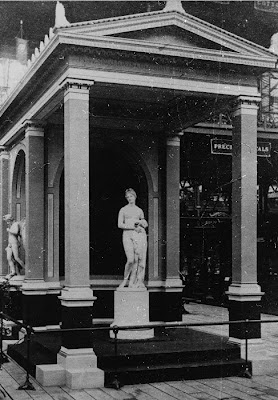 I'm quite flattered and pleased that I've been invited to be one of the guest speakers at a conference entitled Polychromy and Its Environments: New Perspectives on Colour and the Display of Nineteenth-Century Sculpture. The conference will be held in June at the Henry Moore Institute in Leeds, England. You can read more about the conference by clicking here. (bklynbiblio readers will recall my series of posts, such as this one, from when I received a research fellowship from the HMI back in October/November 2010.) The conference addresses the fact that people are used to seeing sculpture as a monochromatic art, e.g. white marble or brown bronze. In fact, color has been a vibrant part of sculpture's history and its installation. Even the ancient Greeks and Romans painted their marble statues, an idea which still surprises people today. In an attempt to revive this practice for a modern audience, John Gibson (1790-1866) reintroduced polychromy with a number of his marble statues from the 1840s on by applying wax-based pigments to the figures. The most famous of these was the Tinted Venus, which you see here in a photograph from when the work was displayed in London at the International Exhibition of 1862 (image: Courtauld Institute of Art). I've tentatively entitled my paper "From the Studio to the Fair: Re-Viewing John Gibson's Tinted Venus," with the intention of arguing that we need to put aside our preconceived notions about this work and its reception by "re-viewing" it in the context of both his studio in Rome and at the International Exhibition, and by reconsidering the reviews published about it at the time. Wish me luck!
Posted by bklynbiblio at 12:15 PM 2 comments: Links to this post 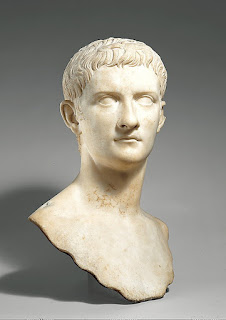 Although the College Art Association's 100th conference just met in Los Angeles in February (at which you will recall I presented a paper), the call for papers for the 2013 conference has gone out. The 101st conference will be back here in NYC. I'm not proposing anything this time, as I have too much going on already, but I'm rather pleased by the wide array of topics. In browsing through the panel sessions, a few piqued my interest, some because of content/subject matter, others because I know the individuals coordinating the sessions.
** For the blogger in me who writes about art and art history, 2 really interesting sessions: "Art Criticism: Taking a Pulse" (chaired by Holland Cotter from The New York Times) and "The Work of Art Criticism in the Age of E-zines and Blogging"
** "The Proof is in the Print: Avant-Garde Approaches to the Historical Materials of Photography's Avant-Garde" (1910-39 photographic techniques)
** "Local Modernisms" (altering the canonical approach that modernism was disseminated from Europe to the world, to suggest instead modernism as a synchronous global phenomenon; chaired by the always interesting Geoffrey Batchen)
** "Bad Boys, Hussies, and Villains" (placing anyone from Caligula [image: Metropolitan Museum of Art] to Silvio Berlusconi at the heart of Italian political visual culture)
** "Color Adjustment: Revisiting Identity Politics of the 1990s" (race/gender/sexuality in the '90s)
** "Parallel Lines Converging: Art, Design, and Fashion Histories" (intersections of these often marginalized disciplines; chaired by the astute Victorianist Julie Codell)
** "Myth and Modernism: New Perspectives on the 1913 Armory Show" (rethinking the famous 1913 exhibition in NYC that arguably introduced modernism to America)
** "Mad 'Men' and the Visual Culture of the Long Sixties" (Mad Men masculinity/feminism infiltrating art historical discourse)
** "Sexing Sculpture: New Approaches to Theorizing the Object" (gender/sexuality and modern/contemporary sculptural practice)
** "For and Against Homoeroticism: Artists, Authors, and the Love that Dare Not Speak Its Name" (19th- & 20th-century ideas about homoerotic desire and homophobia; chaired by Jongwoo Jeremy Kim and Christopher Reed, both of whom I've presented with in the past)
** "Harems Imagined and Real" (eroticization of the harem in Orientalist art)
** "Reconsidering Murals: New Methodologies" (on mural paintings in American public buildings during the late 19th century; chaired by the always engaging Sally Webster)
Posted by bklynbiblio at 10:42 AM 2 comments: Links to this post

Following up on last month's Tulips in a Vase by Paul Cézanne, I've decided to select as the second MWA (Monthly Work of Art) the statue you see here, The Good Shepherd, from the collections at the Vatican Museums. The statue is 39 1/8 in. in height, carved from marble, and dates from the late 3rd century. Scholars refer to this period as Late Antiquity to distinguish it from the heyday of classical sculpture, such as 5th-century B.C. Athens or early 1st-century Imperialist Rome. The implication is that the quality of this work is less impressive than these early masterworks, and it borders on the beginning of the medieval period (no one says "Dark Ages" anymore). This is the time when Christianity had spread far and wide through the Roman Empire. Emperor Constantine converted to Christianity in 312, then issued the Edict of Milan the following year, effectively ending the persecution of Christians. Hence, art from this period reflects a growing interest in Christian subjects, but it has similarities to ancient Greco-Roman precedents. For instance, this shepherd bears some resemblance to figures of the sun god Apollo, with his youthful facial features and curls of hair. Iconographically, however, the statue traditionally has been interpreted by Christians as representing Christ and his parable of the Good Shepherd, who abandons seeks out the one sheep who is lost and return him to the flock (Matthew 18:12-14; Luke 15:3-7; John 10:11-16). Of course, shepherds were a relatively common appearance in Greco-Roman art, so the figure was simply adapted as a Christian icon.

It may seem as if I've chosen this work as April's MWA because tomorrow is Easter. In fact, this statue has had great meaning for me most of my life. Art historians often reflect about the work that first inspired them to pursue the study of art. For me, it was this statue, and it makes me realize how I've come full circle in many ways, specializing in sculpture as I am. In 1983 this statue and numerous other works traveled to The Metropolitan Museum of Art here in NYC for a special exhibition entitled The Vatican Collections: The Papacy and Art. The Pater and the Mater took me to see this show. It was my very first trip to an art museum, and I am almost positive that we went because it was my 13th birthday. I don't know why I would have known about the show, but I suspect the nuns in my school probably encouraged us to see it. I remember being completely overwhelmed by the beauty of the Met building, and I remember waiting on a long line to see the show. But in going through the rooms of Vatican art from ancient through modern periods, it was this statue that left its mark on me. One would think it might have been the Apollo Belvedere or some other magnificent ancient statue on display, but I suspect I may have been bashful about that work's provocative nudity. Instead, The Good Shepherd resonated with me as an adolescent, interested at that time in my Catholic faith, and from birth always instinctively interested in caring for animals. I simply loved how he carried over his shoulders his lamb as a pet with such genuine concern. He was a savior for both humans and animals.

Curiously, I've been to the Vatican Museums twice, and I cannot recall ever seeing this statue there. In looking up more information about it, I was surprised to discover that most of it is 18th-century restoration work, although his torso and upper body and head, and most of the lamb, are 3rd century. I didn't realize that it may have been part of a column or a segment from a high-relief sculpture either. And looking at the work now in reproduction, I cannot say that it is an exquisite work of art, certainly nowhere near as idealistically beautiful as the Apollo Belvedere. This just may be one of those moments where you can never return home again. But maybe that's okay. My memory of the statue and first encountering it led me on a path that has taken me to where I am today. It is my statue, fragmented and restored, misinterpreted and misunderstood. In short, it is human in its most natural, imperfect way.
Posted by bklynbiblio at 1:29 PM No comments: Links to this post 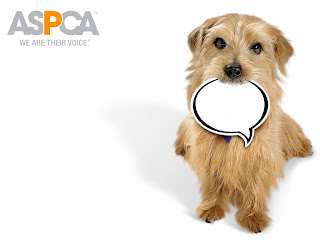 For the past few years, I've been posting about going Orange in April in support of the American Society for the Prevention of Cruelty to Animals (ASPCA), including my first post about the history of the organization. I've often found it rather special that my birthday falls on their anniversary. This year they're celebrating 146 years of animal rights and taking action to prevent the mistreatment of all animals throughout the US. Animals cannot speak up for themselves, so it is up to us to say We Are Their Voice. To donate to the organization, click here. Or buy some orangey gear, like I did with this snazzy cap, so that a portion of the proceeds go toward fighting animal cruelty.
Posted by bklynbiblio at 10:14 PM No comments: Links to this post