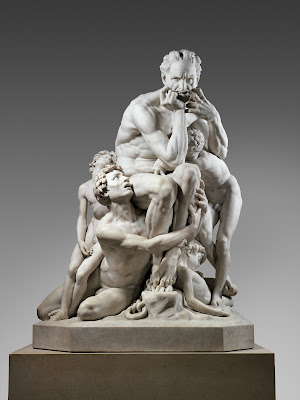 Previous Monthly Work of Art posts around Halloween have included dark works by Goya and Caravaggio. In 19th-century sculpture it is often difficult to find what one can call a "Romantic" work, i.e. a figure who conveys more emotion in its representation, rather than an example of austere beauty or naturalism. One exception is the disturbing and arguably frightening group statue crafted by the French sculptor Jean-Baptiste Carpeaux (1827-1875) entitled Ugolino. Designed to be his 4th-year work while a student at the French Academy in Rome, the large-scale figural group took longer than anticipated. He began in 1857 and completed the large-scale plaster cast in 1861. He himself was uncertain whether the subject would be better appreciated in bronze or marble, and both were eventually made. A bronze cast is in the Musée d'Orsay, but personally I prefer the marble version made in 1865-67 and now at The Met.

The marble sculpture measures almost 2 meters (78 inches) in height and weighs almost 5,000 pounds. The subject comes from Dante's Inferno, Book XXXIII, recounting the story of Ugolino (ca. 1200-1289), the tyrant of Pisa whom Dante and Virgil meet in the Underworld:

... When I beheld
My sons, and in four faces saw my own
Despair reflected, either hand I gnawed
For anguish, which they construed hunger. Straight
Arising all they cried, "Far less shall be
Our sufferings, sir, if you resume your gift;
These miserable limbs with flesh you clothed;
Take back what once was yours."

Ugolino had been imprisoned by his enemies, along with his 2 sons and 2 grandsons, all of whom died while in prison. Ugolino reportedly ate the flesh of his sons and grandsons in order to survive. Here, though, Dante has Ugolino claim that these men pleaded with him to eat them out of filial piety. Dante is not read by most people today, so at first seeing this sculpture in person one may not understand its context. However, once the viewer discovers the subject, there is an immediate sense of horror, but also sympathy. Carpeaux convinces the viewer of Ugolino's anguish as he contemplates survival in a desperate situation, while these men and boys around him die. This work is one of the most haunting sculptures of the 19th century. 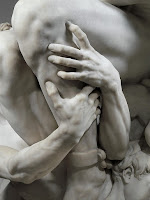 The work was inspired by the ancient sculpture of the Laocoön and owes a great deal to the influence of Michelangelo. In the recent exhibition catalogue on Carpeaux, Edouard Papet writes: "Carpeaux's Ugolino remains a work of profoundly Romantic and pictorial inspiration. ... Like all of Carpeaux's monumental works, Ugolino was the product of a complex integration of disparate sources, both literary and visual, the latter absorbed on-site or in reproductions. This synthesis was combined with a nervous curiosity and irrepressible desire for formal renewal, which, in the days of eclecticism, in no way meant starting from a tabula rasa. ... Ugolino presented all the necessary features: structural complexity, narrative, terribilità, and a variety of expressions. ... Carpeaux's composition closes in upon themselves the open forms of the antique drama of Laocoön and turns it in on itself, while retaining its fundamental elements: nudity, a central paternal figure, conspicuous muscularity, the dying adolescent on the right, and the contrast between a body in its prime and youthful anatomies."

(Translation from Dante and quote: Edouard Papet, "Ugolino," in The Passions of Jean-Baptiste Carpeaux [New York: Metropolitan Museum of Art, 2014], 66-69.)
Posted by bklynbiblio at 10:36 AM No comments: Links to this post