Defense Draft of the Doctoral Dissertation 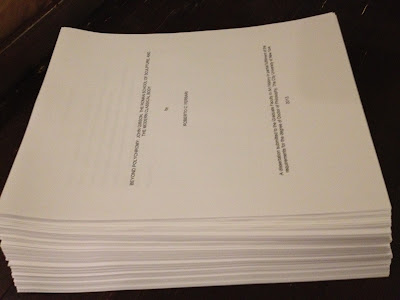 As I've mentioned, I haven't been blogging because I've been a bit inundated with the looming deadline to complete the defense draft of my doctoral dissertation. Amazingly, it looks like I've done it. I worked from 5am until 10:30pm tonight running through the entire thing one last time, and then printing everything out. Ready for the stats?...(drum roll)...3 years, 316 pages (including 26-page bibliography), 745 footnotes, and 126 images. Whew! And now it's 33 days until Dissertation Defense Day. Ah, yes, and in case you're wondering, here's the title: Beyond Polychromy: John Gibson, the Roman School of Sculpture, and the Modern Classical Body.
Posted by bklynbiblio at 10:50 PM No comments: Links to this post

The annual College Art Association conference is still taking place this week. However, I'm thoroughly engrossed in finishing up my dissertation, so I just went today and heard a number of papers, some quite interesting. (Click here for the recap from Los Angeles last year.) The painting you see here is a portrait of the Countess of Charolais (1695-1758) dressed as a Franciscan friar, painted by the Rococo artist Charles-Joseph Natoire (image: Wikimedia Commons). This was the subject of a paper given by Melissa Percival (Univ Exeter) that I thought made some fascinating points. The Countess was notorious in 18th-century France for her romantic liaisons, but refused to marry, so she was seen as a rebel bucking tradition. This is just one of a number of portraits that depict her wearing a friar's monk, called in French "en Cordelier," referring to the knotted cord associated with the friars. What makes this portrait different from others showing her dressed as a friar is that this one plays out a balance of masculine and feminine traits, as if suggesting her more sexually aggressive sensibilities and anti-traditional attitudes. The knot itself is suggestive of the bonds of sexual union, and the way she holds it suggests a phallic symbol, reinforced by the phallic spoon in the cup of cocoa. These are all Percival's thoughts on the portrait. What made her talk more interesting was that she suggested it would be too easy to assume transgender roles were at play here. Dressing up in costumes was normal for 18th-century French aristocrats, and priest/nun costumes were quite popular. Percival suggests then that we shouldn't leap to conclusions about cross-gender appropriation just because she's dressed as a friar in these numerous paintings; rather, it is this particular painting that is unique of them all, in that it has symbols that say more about her sexual interests, and as such was likely meant for private consumption than public display. In looking up more about the Countess, I couldn't help but chuckle to find out that she was buried in a convent for Carmelite nuns.

Percival's paper was part of an open panel session on French Art, 1715-1789. Judy Sund (Queens/Graduate Center--one of my favorite ex-professors) gave a great paper entitled "The Chinese Elephant: Unpacking an Improbable Pachyderm," in which she explored the image of the white elephant seen in Chinoiserie designs from the late 17th- and early 18th-century. She argued that there was a greater absorption of Siamese/Thai culture than previously understood or thought, in the general misconstruing of what "China" actually meant at that time. Ultimately she argued for the broader sensibility of exoticism as a world of fantastic recreations rather than reality. My colleague David Pullins (Harvard), whom I met in 2011 at the Artist's Studio in Britain workshop (see my blog posts here, here, here, and here), gave a well-researched paper on the 18th-century French printmaker Gabriel Huquier (1695-1772). I didn't hear the other papers on the panel, but it was chaired by Colin Bailey (Frick Collection), whose own paper on Fragonard's Progress of Love series at the Frick I wrote about in the 2011 CAA recap. 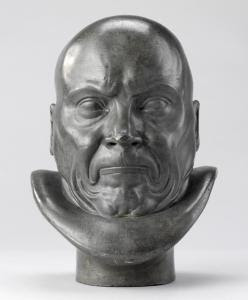 My friend and fellow GCer Jennifer Favorite gave a paper entitled "Creative Time in the Age of Bush: The Public Art Institution as Agent of Political Response" in a panel session on Art and "The War on Terror": Ten Years On. The room was packed with people at this panel session, so I really had a difficult time hearing her paper, which I regret, although I don't think I know any of the artists whose works she showed (maybe too contemporary for me!). The other panel session I went to was For and Against Homoeroticism: Artists, Authors, and the Love that Dare Not Speak Its Name, which was co-chaired by my friend Jongwoo Jeremy Kim (Univ Louisville) and colleague Christopher Reed (Penn State)--whom you may recall I worked with back in 2010 in Montreal at the British Queer History conference. My colleague and friend Richard Kaye (Hunter/GC) gave a paper on 20th-century interpretations of St. Sebastian imagery, and I really liked what he covered with regard to Frida Kahlo and the idea of how women artists appropriate this male homoerotic icon. Andrew Stephenson (Univ East London) spoke about "beach" culture and gay poses in the paintings of Christopher Wood (in Cornwall) and David Hockney (in southern California). The paper by Michael Yonan (Univ Missouri-Columbia), entitled "Outing Franz Xaver Messerschmidt, or Ernst Kris's Creative Homophobia" was an interesting presentation about a mid-20th-century psychoanalytic art paper about the late 18th-century sculptor's physiognomic busts and how they supposedly represented the sculptor's suppressed homosexuality. Messerschmidt really was an amazing sculptor, as you can tell from the bust you see here (fondly titled Afflicted with Constipation; image: Neue Galerie). The 2010-11 exhibition on him was superb! Yonan's paper was less about Messerschmidt, however, and more about Kris, with Yonan arguing that the art historian, from Vienna, had to prove himself to the Freudians working in post-WWII American academia, so he purposely modeled his scholarship on Sigmund Freud's essay on Leonardo da Vinci, in which Freud psychoanalyzed Leonardo as a latent homosexual. I wish Yonan had gone a little further with all of this, including exploring how it differed from Kris's other writings, but perhaps all will be revealed in a future publication. That's all the papers I heard today, but I also did some socializing and networking, which is really what these conferences are all about.
Posted by bklynbiblio at 10:37 PM No comments: Links to this post

For the 12th Monthly Work of Art, I thought I would share a sculpture that ties in well with Valentine's Day, but more importantly also relates to my doctoral dissertation: Cupid Disguised as a Shepherd Boy by John Gibson (1790-1866). This statue was Gibson's most popular subject, with at least 9 known repetitions commissioned in marble by patrons who visited his studio in Rome. All of the versions measure about 51½ in. (131 cm) in height. In our modernist art world, we have a tendency to think of works of art as one-of-a-kind objects, with importance placed on the "first" painting or sculpture, and later copies considered less valuable than the original. For centuries, however, it was just the opposite. Reproduction was key to an artist's success. It was normal for an artist to create a subject and then make replicas of it for patrons as requested. This is one of the reasons why most artists had large studios: apprentices and studio assistants assisted in the reproduction of paintings and sculptures for patrons. Once we understand this was normal procedure for the marketing of art in the past, it's rather intriguing to realize that Gibson's statue, having been reproduced 9 times, was not only one of his most popular subjects, but in fact one of the most popular statues ever made during the 19th century. (And this doesn't include plaster versions that were on display in his Roman studio and at the Hall of Modern Sculpture at the Crystal Palace in Sydenham Park in London.)

Gibson first began modeling the subject around 1830, and it was his belief that it was an original interpretation in sculpture, although modeled on ancient Greco-Roman representations of the god of love. He was directly inspired by Torquato Tasso's pastoral comedy Aminta (1573), in which Cupid appears disguised as a shepherd so that he may use his arrows to play with the hearts of the nymph Silvia and the youth Aminta without anyone recognizing him. The figure merges classical idealism with 19th-century taste for sentimental subjects, although aspects of theatricality are evident as the figure wears a costume to hide his identity. Dressed in a shepherd’s hat and cloak, the tips of his wings slightly visible below the mantle, Cupid’s mischievous nature is masked by a seemingly kind gesture. He hides behind him in his left hand what Gibson described as his “heart-piercing dart,” but reaches out with his right hand “to inspire confidence,” assuming “that air of modesty and timidity to conceal the more his cunning designs.” Some repetitions of the statue have Cupid holding a rose, but others such as the ones shown here have him reaching out with an empty hand.


The 2 earliest versions of the statue were commissioned in the mid-1830s by Sir Robert Peel, Prime Minister, and the baronet Sir John Johnstone of Hackness Hall in Yorkshire, and both of those statues are now in private collections. The statue you see here on the left was commissioned in 1836 by the American artist and writer Thomas Gold Appleton, who later donated it to the Museum of Fine Arts in Boston. The image in color you see at the top of this post was commissioned from Gibson by the Russian Crown Prince (later Czar Alexander II) when he visited Rome in January 1839. That version is now in the Hermitage Museum in St. Petersburg, Russia. Another version commissioned in the early 1840s is currently in the Walker Art Gallery in Liverpool, but the remaining versions are untraced.