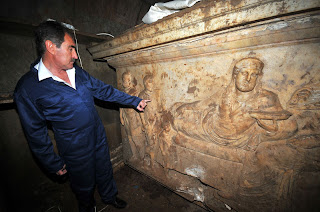 I have been subscribing to Archaeology magazine since at least the mid-1990s. A publication of the Archaeological Institute of America, the glossy bi-monthly magazine offers easy-to-read news-like updates on new discoveries, conservation issues, black-market crimes, and other related bits of information regarding things found underground and underwater. Their website often provides free the full-text of some of the articles too, which is rather nice of them. I always read the articles about ancient Greece, Rome, Egypt, India, and China, but occasionally there are great articles about newer bits of archaeology like the discovery this past summer of an 18th-century ship during construction at the World Trade Center site.

The latest issue online for January/February 2011 has a recap of the top 10 discoveries in 2010. From the list, I found the article on "The Tomb of Hecatomnus" in Milas, Turkey to be of interest. The picture above shows the king's sarcophagus with what may be a carved representation of the king himself (source: AP Photo/Durmus Genc, Anatolian). This 4th-century B.C.E. king of Caria in southwestern Turkey arguably is most famous today only because of his son, Mausolas, who was buried in the Mausoleum of Halicarnassus, one of the seven wonders of the ancient world (and from whose name we get the word mausoleum). Another major discovery that fascinated me was the decoding of the genome for Neanderthals. Contrary to what had been believed, that Neanderthals had nothing to do with Homo sapiens (that's us), in fact studies of extracted Neanderthal DNA now have shown that they are part of our modern DNA structure too. Author Zach Zorich writes: "A major insight came when researchers compared the Neanderthal DNA to the DNA of three modern people (one French, one Han Chinese, and one Polynesian). The team found that all three had inherited between 1 and 4 percent of their DNA from Neanderthals. They also compared the Neanderthal sequence to two African individuals (one Yoruba and one San) and found no indication that they had inherited genes from Neanderthals, who are known to have evolved outside Africa. The research supports the idea that Neanderthals interbred with Homo sapiens between 100,000 and 80,000 years ago as our anatomically modern ancestors left Africa and spread across the globe." 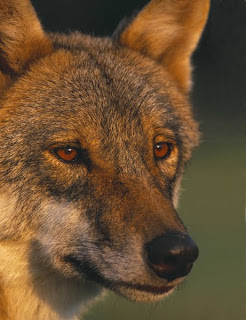 But of all the articles published last year in Archaeology, my favorite has to be the September/October issue that had a series of articles on dogs in ancient cultures. Authored by Jarrett A. Lobell and Eric Powell, "More Than Man's Best Friend" discussed the different ways in which dogs have been part of human culture for more than 15,000 years. We know all dogs descended from wolves that were domesticated (such as the beautiful creature you see here; image copyright Staffan Widsrtrand/Nature Picture Library). The article talks about specific cultures and aspects of how dogs were part of our lives, as companions, guardians, even in some cultures food (ugh!) for thousands of years. The story of dogs in Roman Britain showed how they were more integrated into our lives both as pets and working creatures, as evidenced by found artefacts and fossilized pawprints. Fascinating stuff for us dog lovers!
Posted by bklynbiblio at 11:44 AM No comments: Links to this post

Return of the Hawk 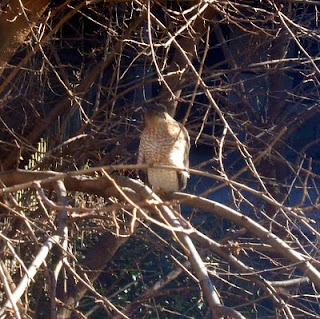 Back in December 2008, I shot this photograph and blogged about the hawk that had been visiting regularly the bare tree in my backyard, even noting that all the other birds disappeared when he was there. I was just finishing my morning cuppa when I noticed outside the window that the beautiful bird had returned. I'm assuming it's the same bird, as these creatures are habitual, although I don't remember seeing him last winter. For a moment, he was staring right back at me. He then quickly proceeded to look everywhere around him with great agitation. I ran to get my binoculars to see him up close, and just as I was about to use them, I realized he was tearing something apart. Yes, my beautiful hawk was having his breakfast, shredding away at something with his talons and beak. At first I thought it was a mouse, but upon closer examination I discovered (much to my dismay) that it was the body of another bird. As feathers flew everywhere, I seriously had to swallow down my nausea and put the binoculars away. It's one thing to see nature on TV, another to see it through binoculars in your backyard. Then it occurred to me...why would it have been acceptable if the hawk had been eating a mouse? Why did him eating another bird disturb me so much? Partly it's because we rank species on a hierarchical scale; birds are better, more attractive creatures than mice. But it's also same species syndrome.

By and large we can handle the reality of nature, that animals do eat other animals (uhm...I did eat a turkey burger for dinner last night). But the notion that some animals will eat other creatures in the same species, or even their young, makes us conscious of our own animalistic nature, that of all the meats "civilized" humans do eat, other human flesh is excluded, as are animals that we've made into pets. Is it all psychological then? In our search for being "civilized," have we consciously made a stipulation not to eat others of our kind? Don't worry, I'm not advocating for cannibalism. And if you're upset about this post, rest assured I'm grossing myself out also, to the point that I'm considering becoming vegetarian again (although I did buy chicken for dinner tonight).

Regardless of how we feel, you know what I'm saying is true. We love dogs until we see them do dog-like things like sticking their noses near other dogs' anuses. We love fish until we see them attack and devour the eggs of other fish. We love koala bears until we realize that in order to mate the male has to rape the female. And we love birds until we see them do shocking things like attacking other creatures (humans even!) and sometimes even eating them. The challenge and beauty of loving animals, nature, and pets is learning to appreciate them as unique creatures who should be appreciated for what they are, not because we can anthropomorphize them. Getting back to the hawk, however, what fascinates me most is that it reminds us if ever we needed proof that birds are the descendants of dinosaurs, just look outside my window. Now I know why all the other birds disappear when he's around.
Posted by bklynbiblio at 8:46 AM 1 comment: Links to this post 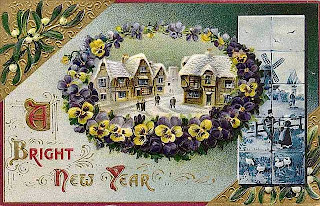 Since I had a quiet Christmas, I figured New Year's should call for some celebrating. I met up with JM and AR for drinks and dinner, then we headed over to a party hosted by friends of ours. Midnight meant champagne, noise makers, and lovely cardboard tiaras as we watched Anderson Cooper and Kathy Griffin on television hosting the ball drop at Times Square (you didn't actually think we would deal with the 100,000 people smoshed in Times Square, did you?). The weather yesterday and today is beautiful, in the upper 40s Fahrenheit, although we're expecting rain for this evening, so perhaps some of the snow will melt and no one will have to worry about the fact that the City still hasn't plowed sections of the boroughs. A freeze is coming back by Monday though. Since it's out with 2010 and in with the new year, I've redesigned the bklynbiblio site, so if you're perusing this post through Google Reader or some other blog reading program, go to http://bklynbiblio.blogspot.com/ to see the new look. Let me know what you think. As for the picture you see here, it's a lovely old-fashioned card scanned by Vintage Holiday Crafts offering wishes for the new year. So here's to 2011!
Posted by bklynbiblio at 12:27 PM No comments: Links to this post