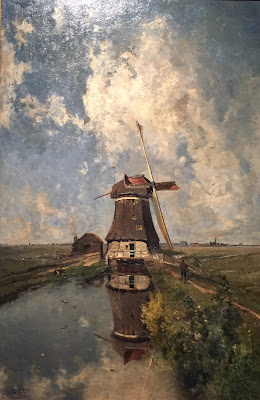 Better late than never, as they say! I realize I've been offline with the blog the past few months, but it's largely because I have been so busy and working on a few writing projects in my non-job time. As I mentioned in a previous post, AA & I took a week-long vacation over Thanksgiving to go to Amsterdam and Copenhagen: two cities I had never visited before. It was quite a nice trip. The weather was cool and it rained a lot in Amsterdam, but I truly enjoyed the canals and the charming architecture in Amsterdam, and the majesty of the Nordic palazzo and upscale fishing village feel one finds in Copenhagen. We hit just about every major museum, not surprisingly. It was at the Rijksmuseum where I discovered this gem of a painting from the 19th century: Willem Roelofs, Meadow Landscape with Cattle, ca. 1880. We did not venture to the picturesque regions of The Netherlands where one can see old, working windmills such as the one in this painting, so this will have to suffice for me for the time being...until I get back and see them live.

Roelofs was a member of The Hague School, a group of artists who were inspired by the French Barbizon school of painters, such as Rousseau, Millet, and Corot. These artists began painting the naturalistic landscape of the French countryside as early as the 1830s but came into their own by mid-century, thereafter helping to alter the respectability of landscape painting from something dismissed as a lesser art in prior generations. This idea of depicting the naturalistic landscape as it actually appears, rather than as an idealized scene for a narrative event, arguably goes back to British artists such as Constable and Turner, but in The Netherlands the most obvious source of inspiration goes back even further to the 17th century with the naturalistic Dutch landscapes by artists such as Ruisdael. You can read more about The Hague School here.

While there is an incredible charm to this painting because of the windmill and the beautiful, soft lighting and fluffy clouds, what is striking is how the windmill dominates the space in this vertical painting. Normally one expects to see landscapes as horizontal compositions, panoramic views that show sweeping swathes of nature. Here, however, by reverting to a vertical format, Roelofs transforms the windmill into a portrait, or at least a narrative composition. The pyramidal structure of the windmill and its arms dominate the center point and then moving out diagonally toward the lower left and right lines, creating a pseudo-head-and-shoulders figure. Although the title references the cattle, both they and the man are diminished by the monumentality of the windmill itself, a man-made machine that for the 19th-century viewer demonstrated the development of technology, i.e. man's dominance over nature. Even the arms of the windmill seem to be moving the air and clouds themselves with a superior strength--which is exactly what they are meant to. This interpretation may seem rather droll because the painting is quite beautiful. But this is where Roelofs succeeds. He portrays the power of the windmill as an object of beauty, conveying both its picturesque qualities and the harmonizing of man with nature.
Posted by bklynbiblio at 8:59 PM No comments: Links to this post 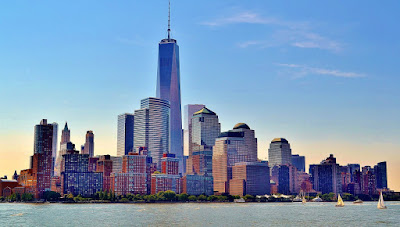 Then back to New York
And skytowers had begun to grow
And front stoop houses started to go
And life became quite different
And it was as tho' someone had planted seeds
And people sprouted like common weeds
And seemed unaware of accepted things
And did all sorts of unheard of things
And out of it grew an amusing thing
Which I think is America having its fling
And what I should like is to paint this thing.

For quite a while now, I have been wanting to start a series of posts about poems I encounter, and the meanings they have for me. This past week AA and I were in Amsterdam and Copenhagen, and one of the books I read was this collection of poetry by the painter Florine Stettheimer (1871-1944), about whom I have blogged before. Returning to New York from our vacation, and seeing the incredible skyline with the new World Trade Center dominating lower Manhattan, I was reminded that no matter how much I enjoy travel and seeing other cities, it is so rewarding to come back home to my "City." Stettheimer's own words convey this same idea. In the mid-1890s, she and her mother and sisters went to Europe, and they only returned in 1914 when the Great War broke out. Almost 20 years had passed since she had been in New York and in that time "skytowers" grew up, taking over the brownstones, and people of all races and creeds and ethnicities seemed to be accepted for doing their own thing. This was for Stettheimer part of the American spirit: "America having its fling." It is a view of New York City that makes me smile. It is as relevant now as it was a century ago.

Posted by bklynbiblio at 8:01 PM No comments: Links to this post