The Passing of Linda Nochlin 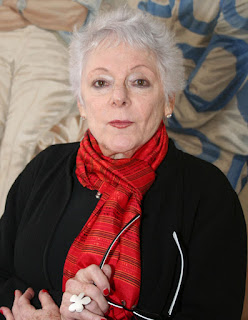 Linda Nochlin, one of the great art historians who influenced more than one generation of scholars, died this past weekend at the age of 86. I first met Linda about 12-13 years ago when I was exploring graduate programs. She kindly met with me in her tiny, book-crammed office at NYU's Institute of Fine Arts, where she worked for decades before retiring a few years ago, and we chatted about Simeon and Rebecca Solomon and my interests in Pre-Raphaelite art. I wound up not going to IFA, so I never had an opportunity to take a class with her, but my adviser at the CUNY Graduate Center, Patricia Mainardi, was one of Nochlin's students, so I feel as if she was my academic-adviser-grandmother of sorts. I saw Nochlin every once and a while afterward through the years at various events, and even though she didn't remember me she always graciously reconnected with me about the Solomons when we spoke again. She was the adviser for a few friends of mine who went to the IFA and they remained close to her through the years.

It is her art-historical scholarship, however, that will live on. Nochlin's pioneering essay "Why Have There Been No Great Women Artists?" (1971) was a watershed moment that changed art history and practically initiated women's and gender studies in the arts and humanities. This evening, Mainardi posted on Facebook that her mentor's essay "was a game-changer, a paradigm-shifter, a breath of fresh air that blew through the art world like a tornado and changed everything and everyone in it. We are all her progeny." If that essay wasn't enough, Nochlin also was a specialist in 19th-century art, particularly that of Courbet, and she wrote an incredible number of social-historical essay about art that are still relevant and worth reading. Among some of my favorites are:


I have gone back to Nochlin's scholarship time and time again because of its insightfulness, but also because of its erudition. She never had to rely on abstruse literary and cultural theory to make her point. She always returned the reader back to the work of art. Some scholars may have gone on to challenge some of her suppositions through the years (that is part of the job, anyway), but everyone who has studied art history since the 1980s has had to contend and acknowledge her contributions to the field and recognize how her work changed things.

Nochlin will be best remembered for "Why Have There Been No Great Women Artists?" Her conclusion ultimately was that because institutions and thus individuals prohibited women from studying properly as men had, it inhibited their ability to become the artistic geniuses their fellow male artists often became. At the end of her essay, Nochlin charged scholars to learn from this mistake of the past and change things for the future. Her words seem prescient for all forms of scholarship that consider minorities and otherness, although at the time she was inspiring women.


What is important is that women face up to the reality of their history and of their present situation, without making excuses or puffing mediocrity. Disadvantages may indeed be an excuse; it is not, however, an intellectual position. Rather, using as a vantage point their situation as underdogs in the realm of grandeur, and outsiders in that of ideology, women can reveal institutional and intellectual weaknesses in general, and, at the same time that they destroy false consciousness, take part in the creation of institutions in which clear thought--and true greatness--are challenges open to anyone, man or woman, courageous enough to take the necessary risk, the leap into the unknown.

You can read more about Nochlin's life and work here, here, and here.
(Photo of Linda Nochlin by Adam Husted.)
Posted by bklynbiblio at 11:36 PM No comments: Links to this post 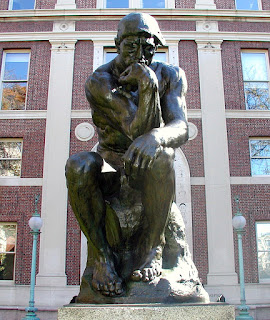 This coming Friday, October 27th, at 5pm, I'm giving a talk (free & open to the public) entitled "Thinking about Rodin: A Century Later." The image here of Rodin's Thinker is a bronze commissioned by Columbia University in 1930 from the Musée Rodin and installed outside Philosophy Hall the next year. (One of my students this past Spring semester wrote a paper about this sculpture and its placement on campus, which you can read here.) I find The Thinker riveting, not just because of its execution as a figure in the round, but also because it is subject to so many different interpretations. I believe Rodin would have agreed with that assessment. It was clearly a significant work for him: another large-scale version of the statue gazes down on the grave of Rodin and his wife.

My talk will be held at the Florence Academy of Art based in Mana Contemporary, Jersey City (basically right next door to where AA and I live). I gave a talk there earlier this year about Gibson, and Rodin could be seen as a nice antithesis ... or is he? Auguste Rodin (1840-1917) is considered by most to be the proverbial "father" of modern sculpture, but when I look at his sculpture I see more of a reinterpretation of art-historical precedents. When you read some accounts of his life and work (e.g. Bernard Champigneulle and Albert Elsen), you sense from these authors an intentional insistence that Rodin broke away from the past to be original and unique. While that may be true to some extent--for just about every artist who strives to be recognized for her/his accomplishments--I don't think it's so "black or white." Successful artists absorb what they have learned and synthesize it with other life experiences to generate something that may seem new or original to viewers. But that doesn't mean their "teachers" should be forgotten or, even worse, elided from interpretations of their work in an attempt to portray them as artistic geniuses.

My talk on Friday will discuss some of this, as well as explore a few interpretations of Rodin's life and work with the numerous centenary-of-his-death exhibitions that have been taking place this year. The picture below is one gallery view I took when we visited the exhibition at the Grand Palais in Paris. It was quite comprehensive and informative, but I questioned whether the connections/influence of Rodin on other sculptures thereafter was perhaps pushing the exhibition theme itself a little too far. 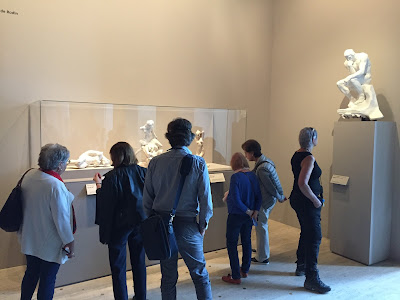 Posted by bklynbiblio at 9:00 PM No comments: Links to this post 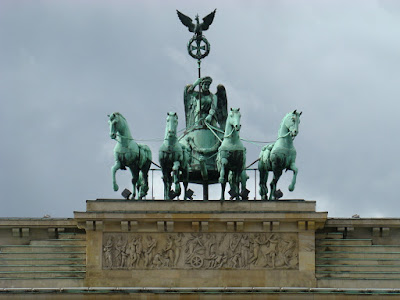 My colleague Tomas Macsotay and I are co-chairing a panel session at the next Association for Art History (AAH) annual conference, to be held April 5-7, 2018, at the Courtauld Institute of Art and King's College London. The deadline for proposals is coming up in a few weeks. Our panel promises to be a combination of object and theory regarding issues of nationalism in sculpture of the long modern period (1750-1950), and we have decided on the image you see above as our "icon" for the session: J.G. Schadow's Quadriga on the Brandenburg Gate, Berlin, 1789-91, made of copper (image: https://theshellmeister.wordpress.com). This sculpture has a long, fascinating history that runs from Prussian history through Napoleon and Hitler to the civil rights movement, and thus seems a fitting illustration for our panel. Here are the full details, so contact us to submit a proposal, and feel free to send it along to anyone who might be interested.

The National in Discourses of Sculpture in the Long Modern Period (c. 1750-1950)

Are specific histories of national ‘schools’ of sculpture premised by the codifying of national identities? What role has been reserved for modern European languages and their historical networks of cultural transfer in enabling or inhibiting this circulation of nationalism in sculpture criticism? From the veneration of Greek art by Winckelmann, to the Romantic idea of a Northern spirit in the work of Thorvaldsen; from the imperial narratives of display at the World’s Fairs, to constructions of allegory in French Third Republic art; from monuments to fallen heroes after World War I, to Greenberg’s and Read’s critical biases for national sculptors – varieties of imaginary geographies in the long modern period have congealed into a fitful history where sculpture is entrenched in projections of the national.

Discourses of exclusion and inclusion became part of how sculptors were trained, public spaces were ornamented, and audiences were taught to read sculpture. These discourses also played a role in the strengthening (and dissimulation) of increasingly border-crossing networks of industrial production, globalised art trade, and patterns of urban infrastructure and design.

This panel seeks papers that offer critical explorations of the national and its tentative ties to the cosmopolitan in sculptural discourse, or consider a transdisciplinary dialogue between sculpture and its texts (e.g. art school writings, criticism, memoirs and biographies, etc.). We particularly welcome papers addressing the role of translation and circulation in fledgling modern criticism, as well as papers engaging recent accounts of cultural transfer in the construction of national and modern artistic identifiers (e.g. Michel Espagne, Béatrice Joyeux-Prunel).

INSTRUCTIONS:
Posted by bklynbiblio at 10:10 PM No comments: Links to this post