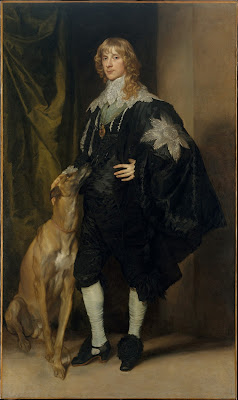 I have made a point to frequently blog about our canine friends whenever possible, particularly in art, so it seems only appropriate to make the latest Monthly Work of Art a dog-themed portrait in celebration of #WorldAnimalDay. (I suspect this day intentionally coincides with the Feast of St. Francis, but deemphasizes the Catholic association.) The work you see here is Anthony van Dyck's portrait of James Stuart (1612-1655), Duke of Richmond and Lennox, a stellar painting at The Metropolitan Museum of Art. This magnificent portrait represents a cousin of King Charles I, and as their catalog entry notes it likely was painted in 1633-34 because he wears the regalia of the Order of the Garter, which he received in 1633. Van Dyck is one of the most famous and arguably best portraitists in Western European art. The Frick Collection here in NYC will have an exhibition of his portraits opening in March, that I very much am looking forward to seeing. But for World Animal Day, it seems worth noting not so much the dashingly handsome human subject in this picture, but the beautiful greyhound who gazes up at his master lovingly with devoted eyes as the Duke caresses his head.

The dog's body is painted differently so as to distinguish him from the rich silk garments on the Duke and the billowing the drapery behind them. This gives the dog his own characteristics, but he also comes to represent along with these props the Duke's wealth and power. It's remarkable how van Dyck uses the dog's natural body position, with his front paws lower in the foreground, thus creating spatial depth and perspective and projecting the Duke forward into the viewer's space. His dog symbolizes fidelity, but the gestures between dog and owner also suggest the Duke's strength of character and his mastery over the beast. 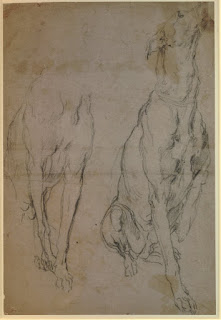 Having played and petted my greyhound nephews, first George and now Winnie, on visits to see their mother SVH in Jacksonville, I can attest to the unusual weight of their large heads as it lays against your hip...and that adoring gaze! Their sinewy legs seem impossible to support their lanky, muscular bodies, but in fact these are incredibly balanced, nimble, and of course unbelievably fast dogs. It is a testament to van Dyck's skill that he was able to represent the dog so naturalistically, and one can see here his dynamic preparatory study for the greyhound, a work now in the collection of the British Museum. The artist used a series of strokes to develop and enhance the complicated muscles and contours of the greyhound's body. His attention to these details help make the beautiful dog an important presence in the Duke's portrait.

If you want to learn more about greyhounds and their imagery in art, you can watch Gary Tinterow's entertaining "Connections" video from The Met. Tinterow was then head of the Nineteenth-Century, Modern, and Contemporary Art department, but he is now Director of the Museum of Fine Arts in Houston. Having raised greyhounds himself, he has a personal interest as well in paintings such as this one by van Dyck.
Posted by bklynbiblio at 6:01 PM 1 comment: Links to this post 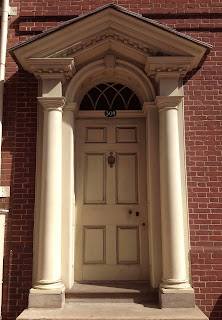 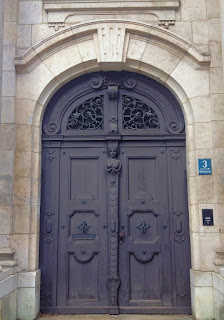 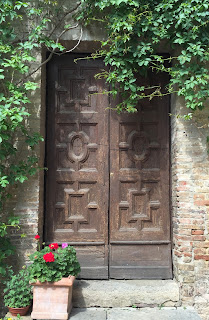 (For other works in my Portals series, click here.)

Doorways are so material a feature in every edifice, so much may the majesty and importance of public buildings and the beauty and convenience of private dwellings be improved or deteriorated by the judicious or inelegant arrangement of the door, that it is to be hoped, these will be considered sufficient reasons for the attention, which it is proposed to bestow upon the subject. If from the mouth the human countenance derives beauty and expression, so does a façade become appropriate and graceful from the proper allocation of the door, the primary object to which every other is subordinate.

-- from Thomas Leverton Donaldson, A Collection of the Most Approved Examples of Doorways, from Ancient Buildings in Greece and Italy, Expressly Measured and Delineated for This Work (London: Bossange, Barthes and Lowell, 1833), p. v
Posted by bklynbiblio at 4:52 PM No comments: Links to this post