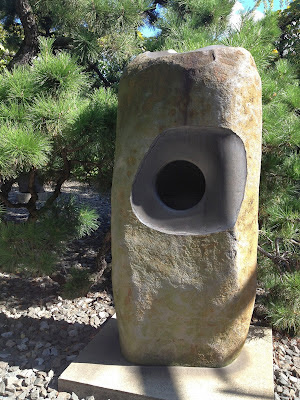 I realize I'm just barely getting this in today, the last day of September, but I want this month's MWA to be by Isamu Noguchi (1904-1988), as I finally went to Long Island City on September 15 to visit for the first time the Noguchi Museum. It was just fantastic. The installations in the gardens and indoor/outdoor museum building epitomized the usually impossible feat of balancing the industrial with the organic. The monumentality of these exquisite stone sculptures was awe-inspiring to me. I realize I seem a bit overly enthusiastic, but visiting the Noguchi Museum and seeing his works reaffirmed for me two things I've discovered about myself in the study of sculpture. The first is that I have a stronger affinity for stone over metal, because of its organic quality. The Zen-like space in the sculpture seen here makes me feel the stone can breathe. The second discovery is that in circumambulating sculpture in the round I have a much greater appreciation for how it occupies space and how we and it speak to one another. The fact that his works are abstract only make this kind of interactive quality more personal and self-reflective. Of course I see the influences of Brancusi, Hepworth, and Chabo on Noguchi, but what that tells me is how they were part of a new generation of sculptors who amplified the vitality of nature by carving natural stone. This particular work by Noguchi is Core (Cored Sculpture), 1978, basalt. Here are a few other pictures I took of the installations and work currently on display at the museum. 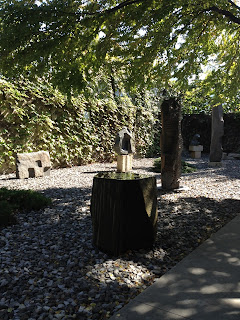 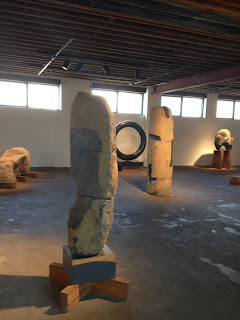 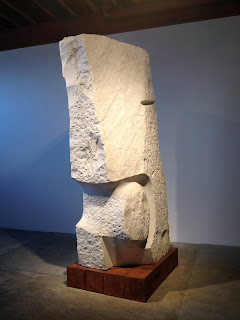 Posted by bklynbiblio at 11:23 PM No comments: Links to this post

DW: Farewell to the Ponds 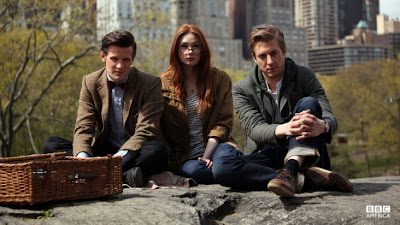 Last night was the mid-season finale for Doctor Who with the episode "The Angels Take Manhattan." Most notably, this episode was the last in which the Doctor's devoted companions for the past few seasons, Amy Pond and and her faithful husband Rory Williams, ended their time with the Doctor in a rather sad, time-traveling farewell, which also happened to take place in 1930s NYC. Having chased aliens through multiple galaxies, traveled millions of years through time, meeting their child as an adult upon giving birth to her (really great episode!), and restarting the universe with a another mirror-image big bang (don't ask, you had to watch it), the Ponds have entered a new dimension of past companions in Doctor Who lore. And what better alien creature to bring into this mess but the most frightening aliens they've ever had: the Weeping Angels (aka Lonely Assassins). The Angels "kill" by sending their victims back in time just by touching them, and then feed on the potential energy created by the vanished person's life. The best part is that they freeze when you look at them--they turn into statues!--so don't blink. Yes, what makes them so freaky is that any statue around you could be a Weeping Angel, and not just a figure in stone or bronze. So don't blink! Or they may touch you and send you back in time. (You know the art historian-studying-sculpture in me LOVES the Weeping Angels concept. Check out how creepy they are below!) Alas, I can't say the episode touched me as much as I had anticipated, but then again for me this whole version of Dr. Matt Smith hasn't compared to Dr. David Tennant, as I've noted before. Still, it's sad to see the Ponds go. We await the next Christmas special and season with a new companion. 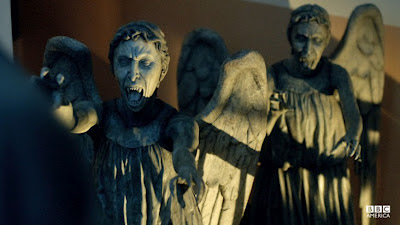 Posted by bklynbiblio at 10:54 PM No comments: Links to this post