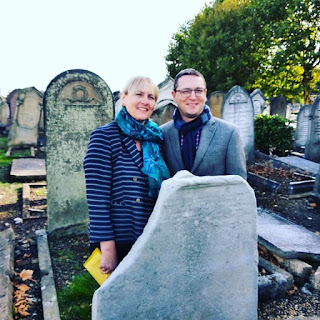 Here is my last "highlights" list from 2018...a little late, perhaps, but not by much... (Here is the 2017 list.) I've discovered it's beneficial for me to record these events because it helps me take stock of the activities I've been involved with and what I've accomplished. I have a tendency to forget things and move on, and reflecting on these things annually makes me realize that I am doing quite a lot professionally and that I need to stop being so self-critical about what it is that I am not doing.

The picture you see here commemorates one of the more memorable events. In early October, I joined my fellow Solomaniac friend & colleague Carolyn Conroy and numerous descendants of the Solomon/Salaman family for the rededication of the Salaman family graves and a visit to the recently rededicated grave of Simeon Solomon, all at Willesden Jewish Cemetery in London. It was a special and humbling moment to be there.

In addition to all our travels (professional and vacation), here is the 2018 list of projects...

Posted by bklynbiblio at 8:01 PM No comments: Links to this post 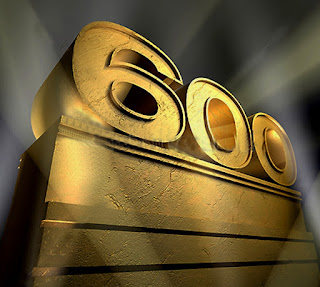 When I wrote my annual New Year's post, I was pleasantly surprised to discover that was my 599th blog post. When I went back to see when #500 was, I was even more surprised to realize it had taken place on New Year's Day in 2015...AND that #400 had coincided with 2013 New Year's. It seems oddly serendipitous, then, that my 600th post is happening now, and still rather amazing that I've had this blog going for 10 years now. I've decided to leave the design of the blog as-is for now, but it's always fun to look at statistics and see how the site has been reached and what are the most popular posts.

It is interesting that my recording of two poems, relating them to certain events at the time, come up as being so popular. I suspect it has to do with the fact that someone is searching for the actual poems or poetry by the authors (in this case respectively Emma Lazarus and Florine Stettheimer), but I appreciate their discovery here and makes me wonder if there is a renewed interest in reading poetry? Last year, I read Richard Blanco's memoirs For All of Us, One Today: An Inaugural Poet's Journey, which was so fantastic in terms of his life experience as a gay Latino in America, but also his zeal and drive for poetry and writing, and reading his poem at Pres. Obama's inauguration. Perhaps we all need more poetry in our lives...

Thank you to the readers who contact me with encouragement to continue blogging along!
Posted by bklynbiblio at 11:05 AM No comments: Links to this post 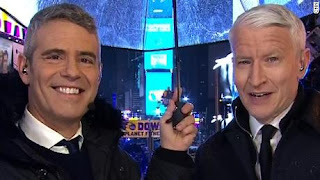 Earlier today I was speaking to Uncle Eddy and I said to him, "Can you imagine it's 2019?!"--to which he replied, "NO!" The way time flies by, it won't be long before we hit 2028, the centenary of his birth! We spent a lovely Christmas and the week afterward with AA's family in Kansas City, MO. Aside from family visits, I indulged in my first-ever KC barbecue dinner (delicious, but heavy on meat), and we visited the Nelson-Atkins Museum of Art, the Kemper Museum of Contemporary Art, and the National World War I Memorial and Museum over the course of the week. We flew home on Sunday, then headed into the City the next day for a New Year's Eve dinner with AR, GM, and GG. It was pouring in NYC, so everyone gathered for the Times Square ball-drop got drenched, including Andy Cohen and Anderson Cooper (above), whom we watched while staying toasty warm and dry just a few blocks away watching and supporting our fellow gays on TV. (Other than watching Anderson Cooper get drunk on shots, it wasn't as eventful as we would have hoped though. Or am I being nostalgic for Dick Clark?)

Today for New Year's Day we had a quiet day at home. We ate for dinner butternut squash soup, cod with lemon and pomegranate, and steamed broccoli. Then we watched the gay-themed movie The Cakemaker (2017, image right), in which a German baker goes to Jerusalem to find the family of his recently deceased lover, with some awkward consequences. It wasn't a bad movie...the acting and directing was good, there were some existential questions about sexuality worth pondering, and there were a few important moments about Jewish/Gentile cultural differences, but it was a bit slow. I am craving black forest cake now (you have to watch to get the message).