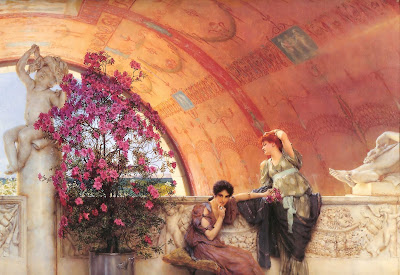 Lawrence Alma-Tadema (1836-1912) is considered by most to be a British artist, but in fact he was born and raised in The Netherlands and did not emigrate to London until 1870. He was then a widower with two daughters trying to make a bigger name for himself in the commercial art capital of Britain. He succeeded, becoming one of the greatest names associated with the Aesthetic Movement, his London home a salon for artists, writers, musicians, composers, and actors to socialize and exchange ideas. His second wife and daughters were all painters too. What people love about Alma-Tadema today was his uncanny ability to capture imaginatively Greco-Roman lives from over 2,000 years ago as if they were people we saw in our daily lives today (or, for his contemporaries, in Victorian times). His critics, however, have a tendency to refer to his paintings pejoratively as nothing more than "Victorians in togas."

Last November, when AA and I were in Amsterdam, we took a day trip to Leeuwarden to see the new exhibition Alma-Tadema, klassieke verleiding (Alma-Tadema: At Home in Antiquity). My review of the exhibition has just been published in Nineteenth-Century Art Worldwide, which you can read here for free. One painting in the exhibition, that you see above, is Unconscious Rivals, 1893, from the collection of the Bristol Museum & Art Gallery. My own first exposure to Alma-Tadema was through  a reproduction poster of this painting in the mid-1990s, when my mother fell in love with it and we worked together at a framer getting it matted and framed. It thereafter hung in my parents' bedroom for about fifteen years. I was always fascinated by the incredible details in the picture: the glean of the marble benches; the vibrancy of the azaleas; the details in the barrel-vault ceiling. Even more intriguing, however, was the psychological relationship between the two women depicted. I remember my mother and I talking about this when we first saw it, and I think this was the added bonus, in addition to the exquisite details, that sold us on purchasing the poster and framing it.

Regardless of whether or not one likes Alma-Tadema's work, most agree that his attention to detail and ability to paint furniture, drapery, jewelry, architectural settings, etc., are noteworthy. As I write in my review of the exhibition, I was eager to see this particular painting in the show, more so because of my own personal connection to it through that poster. On first seeing Unconscious Rivals in person, however, I admit I was a little disappointed because it is smaller than I had anticipated. This is not an uncommon experience after first engagements through reproductions. But the more closely I examined the painting, the more I could see that it was a jewel of a picture with intricate details like the azaleas, which are almost too hyperrealistic in their depiction.

The scene shows two young women who respond differently to an unseen man with whom each of them, unbeknownst to the other, is in love. (The man, presumably a soldier, is represented by the legs and sword of an ancient statue of a seated gladiator.) This narrative in the picture was part of the tradition of nineteenth-century genre painting, which audiences of the day appreciated and understood well. However, while traditional genre painting offered a moral message, here aesthetics take precedence and the depiction of the two women is more a statement about beauty rather than morality. The viewer (then and now) can identify with them, sympathizing with the shy temperament of the brunette who gazes toward the picture plane with a sheepish smile, or responding sensually to the vivacious red-head (a Pre-Raphaelite trope of the femme fatale) flirting with the lover below the balcony. The painting is a reinterpretation of the allegorical sacred and profane that stretches backward to Titian and forward to Freud. Alma-Tadema’s Unconscious Rivals relies on this form of empathy that transcends time and nationalism to make its point. It appeals to audiences to identify with these women emotionally, regardless if the women or the viewer are ancient Roman, British Victorian, or twenty-first century Dutch or American. It is, indeed, a beautiful painting. You can see more of his paintings, and some gallery views from the exhibition, in my review.
Posted by bklynbiblio at 6:06 PM No comments: Links to this post