The Power of Political Protest Art 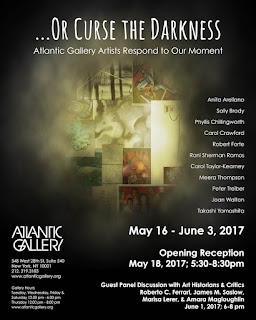 The past few months I have been crazy busy, which is why I haven't been blogging lately. My apologies for that. I hope I can back into the swing of things again. It seemed only appropriate that I return to this blog with a NYC- and art-themed post, relating to a video project I was involved in that has now gone live.

The Atlantic Gallery in Chelsea recently held an exhibition entitled ...Or Curse the Darkness in which some of the member artists exhibited work that related to their feelings about the current political environment in the USA. Say what you will, pro or con, we are living in extraordinary times under this President and his administration. The poster for the exhibition is the image you see here.

On June 1, 2017, in association with the exhibition, I chaired a panel session at the gallery entitled "The Power of Political Protest Art." Following my introduction, we had three speakers: James M. Saslow, Marisa Lerer, and Amara Magloughlin. Each of them gave their own 7-10 minute take on an aspect of political protest art. We then had a Q&A, and we also spoke a little about some of the art on display, as did some of the artists about their own work. The entire presentation was filmed and edited by NYU student Yijun He.

My introduction covered one particular current event: the now-infamous Kathy Griffin photo by Tyler Shields, showing her holding the severed head of a mannequin-of-sorts who reportedly bore a resemblance to the President. Undoubtedly some of what I say in the video will upset people, but overall I attempted to approached the image from an art-historical perspective and relate it to other political images. I should note, publicly on this blog, that I don't condone the image itself; I don't believe in violence in general, so clearly I don't support this image. However, it's the context and fallout that I talk about, in relationship to what happens when some individuals participate in political protest art. Saslow gave a historical overview, bringing things right up to the ACT-UP movement. Lerer spoke about Argentinian and other Latin American political protests from the 1970s through today. Magloughlin focused on the ongoing reception of Picasso's Guernica as a form of political protest art.

The video is now live. The sound quality is a bit rough the first couple of minutes, but then it picks up and everything works out beautifully for the approximate one-hour presentation. You can find the video on YouTube here: https://www.youtube.com/watch?v=Z2zxhhWM7iI

Posted by bklynbiblio at 10:07 PM No comments: Links to this post