Statue of a Countess 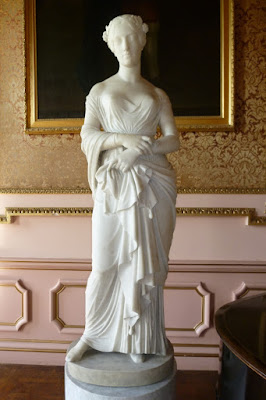 I am pleased to share the news that my latest article, "Between Venus and Victoria: John Gibson's Portrait Statue of the Hon. Mrs. Murray, Later Countess Beauchamp," has just been published in Nineteenth-Century Art Worldwide (along with a number of other very interesting essays by some colleagues I know that I look forward to reading). My essay discusses for the first time the portrait statue you see here that Gibson made for the 3rd Baroness Braye of her widowed daughter Catherine, who later married Earl Beauchamp (pronounced "Beecham").

The statue was commissioned in 1842 when the Baroness and members of her family were on their grand tour in Rome, and it was completed in 1846. Gibson exhibited the marble statue at the Royal Academy that year, where it received mostly positive feedback, but one critic rather surprisingly compared it to the Hottentot Venus. (You'll have to read the article to learn why!) The Baroness and her daughter were friends with Gibson for many years, and he often visited them at their London home and at Stanford Hall, where the statue is on view as part of the family's art collection to this day. What makes the story of this statue even more remarkable is that Catherine made the bold decision to have Gibson tint it while it was still in the early days of his own experiments with polychrome sculpture (i.e. Tinted Venus). As I discuss in my essay, she received sharp criticism afterward for having done this, but Gibson urged her to "fight it out" and not give in to the critics. (Wise words I need to remember myself many days!)

I am incredibly grateful to the current Baroness Braye and her family for their generosity and hospitality in giving me access to unpublished family papers and their homes, and to the staff at Stanford Hall for responding to all my inquiries along the way. Without their encouragement and support, this article never could have come to fruition.
Posted by bklynbiblio at 7:24 AM No comments: Links to this post

Art Libraries at the Rijksmuseum 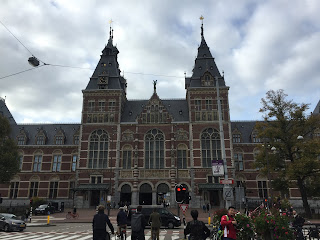 I was quite honored to be among the guest speakers for the recent 8th International Conference of Art Libraries, held at the Rijksemuseum in Amsterdam (facade of the building seen here). The conference itself had some very interesting papers and it helped inspire a few ideas in my head, which is always a good thing. I was surprised that so many people from the U.S. were presenting, but most of the audience members came from throughout Europe. Two speakers even presented about art libraries in Japan, which quickly reminded me that we need to stop thinking so Euro-centrically about all these things. 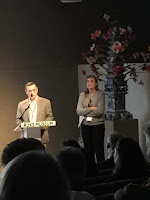 My co-presenter (Melanie Wacker, also at Columbia; photo at left of us taken by Ann Lindell) and I gave a talk entitled "From Curatorial Files to Linked Open Data: Cataloging the Art Collection at Columbia University," discussing background on the art collection my department oversees and how our management of metadata and cataloging moved from traditional paper files to a metadata schema that we were then able to convert to MARC so as to be published in the Columbia Libraries online catalog, to convert for use in the soon-to-be-launched Digital Art Properties collection, and then used as the basis for a linked open data project that was a grant to test art for use in BIBFRAME, the future XML-based form of cataloging established by the Library of Congress that eventually will replace MARC. I realize much of what I just wrote there may seem like gibberish to anyone but IT specialists and librarians, but the point is that up until recently no one could search anything in the Columbia art collection, whereas now the art collection is now not just discoverable but available in digital format (highlights anyway) and is being used to establish new models of excellence for ways of cataloging art by libraries in the future. It's been a team effort that we are all proud of. 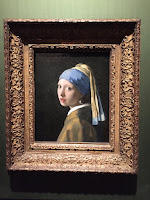 It was quite humbling to be presenting at the Rijksmuseum, one of the grandest collections of art in the world. This was my second visit there, the first time two years ago when AA and I traveled to Amsterdam. On this trip we also made a visit to The Hague where we visited the Maurithuis and I truly fell in love with Vermeer's Girl with a Pearl Earring, one of those examples of art where you have to see it in person to truly admire its majesty in terms of lighting, brushstroke, and overall composition. She is more modern in her appearance than I ever realized. We also visited Delft, Vermeer's home, which was an absolutely charming city. I also had an opportunity to visit the Hermitage Amsterdam and see the Neoclassicism exhibition with works from St. Petersburg; the Canova sculptures were just exquisite. I'm in London right now writing this, with a few other things to do here before heading home in a couple of days.
Posted by bklynbiblio at 4:56 AM No comments: Links to this post