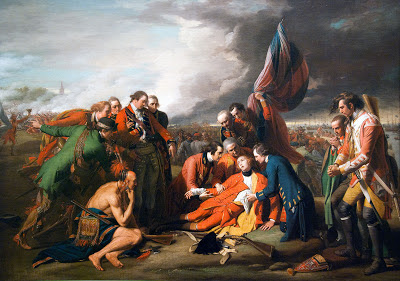 Better late than never with our Monthly Work of Art! Since I started teaching another semester of 19th-century European art this past Monday, I thought I'd share Benjamin West's The Death of General Wolfe, 1770, approx. 5 x 7 ft., in the collection of the National Gallery of Canada. Although historians of American art likes to claim West for themselves, I'm among those who think of him as a British artist. He was born in the British colony of Pennsylvania in 1738, eventually traveled to Rome for some artistic training, but made his career in London, where he died in 1820. He was elected the 2nd President of the Royal Academy of Arts after Sir Joshua Reynolds died. I always start this lecture class off with a discussion of history painting, i.e. large-scale narrative subjects showing heroic acts and events that taught viewers a moral lesson (or as Robert Rosenblum dubbed it, an exemplum virtutis). History painting was considered the highest achievement in the hierarchy of painting styles from the Renaissance through at least the mid- to late 1800s. West's painting depicts the end of the Seven Years' War between England and France, which was fought on Canadian soil. General Wolfe was mortally wounded in 1759, and on his death bed he was brought word that they had beat the French. Wolfe was proclaimed a national hero in Britain, and numerous artists depicted him in art apotheosizing him as an allegorical figure from the past. West broke with tradition and chose to represent the scene with Wolfe and his soldiers wearing contemporary military clothing, which was unheard of at the time. Reynolds and others blasted West for this radical move, but when the painting was exhibited at the Royal Academy in 1771 it was a sensational success with the people. Prints were made of it, and it secured West's reputation. 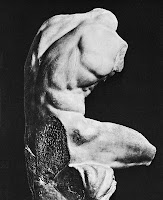 Although he broke new ground by depicting a contemporary war scene with a journalistic eye for detail, in fact the entire scene was made up. None of the portraits of the famous soldiers who surround West in the painting were there when he died, nor was a Native American present either. More importantly, though, West still conveyed the ideology of the exemplum virtutis by turning the death of Wolfe into a "Lamentation of the Dead Christ" scene, a recurring image in hundreds of Renaissance and Baroque paintings that viewers would have recognized immediately. (If you count the soldiers, you will discover there are 12 "Apostles" surrounding the Dying Christ-like Wolfe.) West also exoticized the scene by drawing on his American background in depicting a Native American in the foreground of the painting. But even this was an imaginary moment, for West modeled this figure on the famous Belvedere Torso, seen here, an ancient Hellenistic sculptural fragment that was famous among artists and frequently copied by them when they visited the Vatican Museums. By drawing on these visual tropes from art history, West was able to craft an important history painting using traditional methods, yet he simultaneously revitalized the art of history painting itself by offering viewers a modern twist on an old classic style.
Posted by bklynbiblio at 1:27 PM No comments: Links to this post 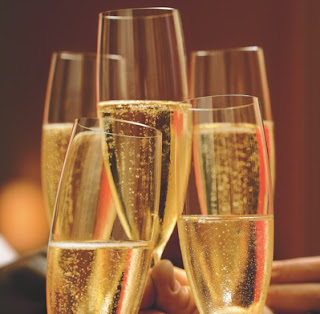 bklynbiblio has reached its 400th post! We made it to 300 back in May 2011, so it has taken a while to get to this one, but I think you'll agree that this is still quite a milestone. It also conveniently times well with our annual New Year's Day post, so what better way to kick off 2013 and celebrate 400 posts then with a lovely champagne toast!

My thanks as always to all of my readers for your continued support and encouragement. Here's to the next 100 posts!
Posted by bklynbiblio at 6:00 AM 1 comment: Links to this post