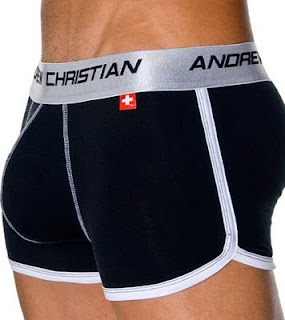 Daily Jocks is a blog that…well, basically it’s a website with pictures of hot guys modeling underwear, but it’s also a place for advertising current trends and styles in men’s briefs, jockstraps, tanks, etc. This recent post from them about male enhancement clothing is supposedly the new big (pun intended) trend in men’s underwear. Yes, Gentlemen, apparently it is now essential that we show off our masculinity by wearing underwear that not only cradles the goods in a cup, but also projects them outward to create what looks like a pear in one’s pants (because if it looked like a banana it would be illegal). It’s a lot like a Victoria’s Secret push-up bra, and we all know the effect that has on the viewer no matter what your sexual taste or orientation.

Admiration for male genitalia dates back millennia. The phallus became a symbol in art and religion because of its erective and procreative nature: it is a tool for male seed to generate life. Thus, in early cultures where male virility was critical to the survival of the people, the phallus became an object of worship. The ancient Vedic people of India worshipped a large cylindrical object called the lingham, which represented the power of the god Shiva as creator and destroyer of the world. The ancient Romans crafted bronze phalloi as chimes and not infrequently hung them over doorways to ward off evil spirits. All those who entered were supposed to touch the object too as an expression of good luck. We may think the power of the phallus in these contexts is now lost to us, but it simply has been modified in its representation. Look around the neck of any Guido: that gold bull horn charm he’s wearing is a sanitized descendant of the ancient Roman phallus. 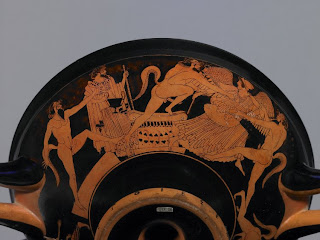 And what about size? Does it really matter? In ancient Greece, a smaller (probably average sized) penis was preferred because it was a mark of being civilized and cultured. Only satyrs (half-man, half-goat creatures) were depicted in vase paintings with engorged members, like in the underside of this kylix from the British Museum, suggesting this male feature was a mark of animalism. This idea carried through into Christian art, where demons are the only creatures ever shown abnormally oversized. Of course throughout time men always have obsessed over their size when compared to other men. Sometime in our century, however, it seems like the obsession became a tool for marketing, with everything from surgical procedures to infomercials that promise to make a man bigger. What’s key, however, is the lack of evidence that size has anything to do with power. According to medical experts Dr. David Delvin and psychotherapist Christine Webber, “[I]t's true that some men have big penises and some have smaller ones, just as some men have small feet and some have big feet, but the measurement is not - repeat not - an index of virility.” Even more fascinating is the visual perception one has of penis size. Indeed, the reason why most men think they are smaller than other men is because of foreshortening. The angle at which they see themselves creates a visual effect that stunts the overall effect, whereas when looking at other men, they see their member at a natural angle. 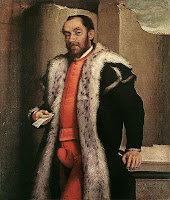 None of this changes the obsession society now has with male enhancement. But it isn’t the first time this has happened. When you think about it, this new trend in underwear is nothing more than a modern-day codpiece to show off one’s goods. Once late medieval Europeans began wearing hose (early trousers), which originally were just two legs of cloth, long doublets (early jackets) draped the hips and thighs and thus the man was covered but roamed free. By the 15th and 16th centuries, the hemline for doublets had risen, so it became necessary to cover up what was now exposed. Enter the codpiece! (Note that cod comes from the Middle English word for scrotum.) This new fashion accessory also came to be used for protection in warfare and sportsmanship (hence the current day jockstrap and sports cup used by athletes), but by the early 1500s the codpiece was a fashion statement. Men from Henry VIII down to the mercantile classes took pride in showing off the size and design of their codpiece, as is evident in this 1565 portrait of Antonio Navagero by Giovanni Battista Moroni (Pinacoteca di Brera, Milano).

Late 18th- and early 19th-century men’s fashion also had a phallic emphasis due to the front flap in their trousers that folded down. It was not by chance that the artist Anne-Louis Girodet crafted this 1797 painting of the former slave and politician Jean-Baptiste Belley with a pronounced emphasis on his crotch (Musée national des châteaux de Versailles et de Trianon, Versailles; image: Metropolitan Museum of Art). While admittedly intimating the then-believed inate association of his race with animalism, the painter also was suggesting the strength and power he wielded in his political fight against issues like slavery, as he is posed with a bust of the philosopher and abolitionist Guillaume-Thomas Reynal.

So, in brief (no pun intended), male enhancement clothing has come full circle. Buy it! Admire it! Enjoy it! Just remember that it's a fashion statement and may be a nothing more than an empty codpiece.
Posted by bklynbiblio at 11:36 AM

Gosh, thanks. JockstrapCentral.com had a new listing for a loop that kept the jewels hanging from an elastic belt: Joe Snyder Man-Up Bulge Booster. It was "out of stock" upon announcement because of the huge demand. Like PR, I enjoyed the comparison to historical bulging up and showing off. (The "word verification" letters are "mantsi" and I wonder what it means, probably not sissy boy.)

I think that it is awesome that they recognize you as the top Wiki in male enhancement. Your blog is definitely more informative than any other one that I see. Extenze