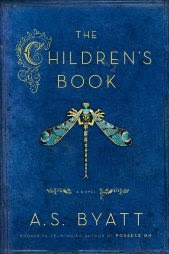 Last night, my friends PR, AM, and I had the great pleasure of going to a reading and book signing by one of my favorite authors, A.S. Byatt, at the Strand Bookstore near Union Square. Byatt's new novel, The Children's Book, was released in the U.S. a few weeks ago, but it's been on sale in Europe since the summer and has gotten excellent reviews (I almost bought a copy in Rome this summer when I saw it there). Byatt is one of the leading voices in the neo-Victorian movement, recreating Victorian-like tales with a high-quality literary voice. She won the Booker prize for Possession (1990), my all-time favorite novel, and in 1999 was made a Dame of the British Empire by Queen Elizabeth. Here is the Strand's summary of her new book: "This spellbinding novel, at once sweeping and intimate, spans the Victorian era through the WWI years, and centers around a famous children's book author and the passions, betrayals, and secrets that tear apart the people she loves." I have to admit, I'm half-tempted to stop doing homework and research in order to start reading it! After all, any book that puts Art Nouveau jewelry in the shape of a dragonfly on the cover must be decadently fantastic. Byatt read for about 10 minutes and then answered questions from the audience. In answer to one person, she spoke about her ability to modulate her literary voice, what is one of the reasons I have always loved her writing. In other words, her novels frequently have her characters write texts-within-texts (poems, stories), and she writes them truly as if they were lifted from 19th-century writers themselves. That takes great skill and shows her own academic training as a literary critic specializing in British and American authors from Wordsworth to Eliot. Byatt's great claim to fame, I believe, will be her resurgence of interest in fairy tales geared toward adults. That doesn't necessarily mean "naughty" tales, as they are often dark but always fantasy-oriented. For instance, The Djinn in the Nightingale's Eye (1994) is about a professor who discovers a lamp with a genie in it who grants her three wishes. The Children's Book seems to converge many of the things she's become famous for, so it should be a great read for over the holidays. 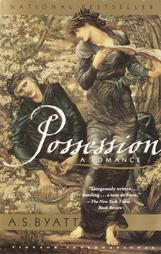 During the book signing, I told her how Possession changed my life, that not only was it my favorite novel but that as a PhD student it validated my own interest in Victorian art and my ongoing pursuit of the letters of Simeon Solomon. She must have been pleased to hear that because, in addition to personalizing and signing the book, she added an inscription: "Work well!"
Posted by bklynbiblio at 5:07 AM

Hello!
This is not a comment to the post above, because I didn't read it, yet.
I found your blog just now through a google search on Yinka Shonibare's The Swing and very much enjoyed reading your post on it and Le Balancoire. Wish I possessed you attention to detail when analysing images!
I shall return to your blog.
Thanks,
Coco

Coco, thanks for the comment. It's always great to hear that others are enjoying what I'm writing.

Hey, I was at that book signing, too!

I was also struck by her comment about her adoption of different voices -- especially how she felt free to do it only within the framework of a novel set in the standard-issue omniscient voice, so that when she switched to another style there would in effect be giant quotation marks around it. I found that really interesting, especially since I think one of the themes of Possession is how the postmodernist who knows about everything can actually be restricted by that knowledge--just as Roland and Maud are actually hampered by their hyper-self-awareness, authors with access to any literary style can get so paralyzed by fear of anachronism that they can’t write in any of them unless they drench them in irony first.

I just wish I could express these things off the cuff half as eloquently as she does -- during the Q&A her responses were so articulate she might have been dictating another book, sentence by semicolon-laden sentence.

Pizzazzle, I think you're on to something there. I am in full agreement with Byatt's ability to speak off the cuff so eloquently. I suspect, however, she's had to answer that question more than once before. Thanks for writing.