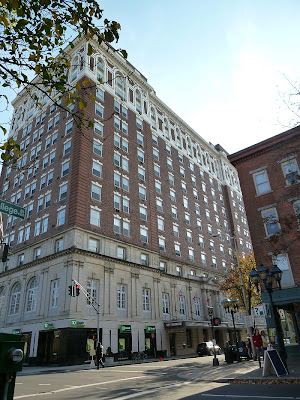 I've been in New Haven for approximately 55 hours, and while I'm more settled now than when I first arrived, so far it's been a relatively quiet start. Friday night I was staying at the Graduate Club, and I spent that afternoon getting my Yale ID, then touching base with the YCBA staff and getting acquainted in more detail with the Library itself. Because yesterday was the annual Harvard-Yale game (I presume that's football?), plus with Thanksgiving coming up, I'm arriving here during an unusual time when many things are shut down for the week, including some of the Libraries. Nevertheless, I managed to keep myself entertained a bit this weekend. On Saturday, I moved into the Taft Apartments, which you see here. They were built in 1912 and named for Pres. Taft, who after his presidency taught at Yale and lived here. The apartments, however, are perhaps more famous because they're next to the Shubert Theater, which historically has been a testing ground for plays before heading to Broadway, but these days seem to be stuck doing revivals and seasonal works like A Christmas Carol in early December. The Taft has made an appearance in more than one film too, like All About Eve (1950), when Eve (Anne Baxter) is performing at the Shubert and she is confronted in her Taft apartment about her own past. (If you haven't seen this movie, get it now...it's one of Bette Davis's best films with her classic line "Fasten your seat belts--it's gonna be a bumpy night!") As for my apartment, so far so good, although my previous occupant wasn't exactly the cleanest person, leaving behind half-dirty dishes and her long black hair on more than one towel, including (shockingly) the kitchen dish towels which, alas, I did not discover until after I cooked my dinner and found hair in my food. (Yes...very gross.)

Shermania had written me about an exhibition at Artspace called Library Science, and I'm so glad he told me. It's the perfect combination of contemporary art and librarianship coming together in a way that would satisfy any bibliophile or library nerd. Candida Höfer was of course included, showcasing one of her large-scale photographs of libraries, but a number of other artists in the show were new to me and had some interesting ideas about libraries, books, and cataloging. Mickey Smith rephotographs found photos of people posing with faux libraries as backdrops, calling into question what the library is meant to suggest when it is not real. He also laid out an entire collection of hundreds of volumes of the Federal Reserve in a way that one quite literally walks over the books in order to look at his photographs. Considering this entire series is now available through online databases, Smith makes us rethink the evolution of information and the gradual disappearance of books in the e-publishing world as we walk all over them and what they historically have represented. Reynard Loki reenvisions the idea of cataloging with an ongoing project in which he indexes on paper his entire library by the first and last lines of each book he owns, and Erica Baum's large-scale photographs of subject heading cards from old card catalogs suddenly makes words like "Power" take on a whole new visual sensibility. This was an interesting exhibition for sure. 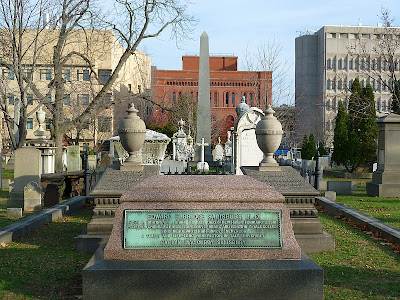 I was working on a different review today, but by lunchtime I decided I needed to get some air so I took a long stroll and wound up, oddly enough, in the Grove Street Cemetery. Yes, I admit, I'm a cemetery stroller. I find cemeteries to be very peaceful places where you can commune with nature (loved the birds and squirrels), but also look at the sculpture of the tomb stones and learn about people with whom I have no connection but who were important to someone at some time enough that a marker still exists to mark their remains. A number of the oldest tombstones here date from the 1700s and are now in very bad shape, but a number of 19th-century stones are still intact. I was pleasantly surprised to discover the grave for Eli Whitney (inventor of the cotton gin), but of all the plots I saw the one that caught my eye was that of Edward Elbridge Salisbury (1814-1901), which you see in the foreground of the image above. It's not that the sculpture is of great significance, but when you read the accomplishments of this man, most notably his becoming Yale's first Professor of Arabic and Sanskrit during a period when hardly anyone knew a thing about these languages, you realize he was an important academic figure. I had to look up more about him and discovered that his entire collection of books and manuscripts was donated to the Libraries and are the foundation for the Near East Collection. Looking in WorldCat, however, I was surprised to see what he had authored. While he did publish a few tracts on things like the Persian cuneiform alphabet (1849), he also wrote about Michelangelo (1861), and published a number of books about genealogy and his own family history. It makes you realize how specialized we've become in academia today, and it reminds me of the importance of making sure I don't get too pigeon-holed in my own work.
Posted by bklynbiblio at 7:47 PM