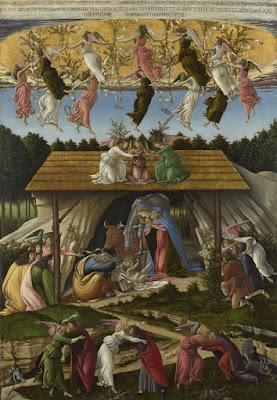 Here in New York City, we are having record-high temperatures for Christmas. It is supposed to reach 74 degrees (23 Celsius)! I thought I was staying in NYC, not going to Florida, for Christmas! Today AA and I happily will spend our first official Christmas together on the actual Eve & Day (rather than before or after the holiday) in Jersey City. Tomorrow we are scheduled to meet up with the nephew and nieces to ice skate in Bryant Park...in 64-degree weather...assuming the ice doesn't melt beforehand.

With another Christmas upon us, it seems only appropriate to share another beautiful and important Monthly Work of Art suited to this time of year. The picture you see here is by the Renaissance painter Sandro Botticelli and this painting, from about 1500, is called the Mystic Nativity. While the central portion of it celebrates the birth of Christ in a traditional manner--albeit with Botticelli's usual sinuous forms, as best exemplified by the Virgin Mary--and with humans and angels paying homage to the newborn, above them a group of angels celebrate his birth in a rondo dance, and below angels embrace humans as an extension of God's love. These two parts of the painting elevate it to the esoteric.

This painting was likely a private devotional work commissioned by a wealthy merchant in Florence. Today it is in the collection of the National Gallery in London. On their website, here is what the curators say about it: "Botticelli's picture has long been called the Mystic Nativity because of its mysterious symbolism. It combines Christ's birth as told in the New Testament with a vision of his Second Coming as promised in the Book of Revelation. The Second Coming--Christ's return to earth--would herald the end of the world and the reconciliation of devout Christians with God. The picture was painted a millennium and a half after the birth of Christ, when religious and political upheavals prompted prophetic warnings about the end of the world."

Merry Christmas to you all!
Posted by bklynbiblio at 8:27 AM