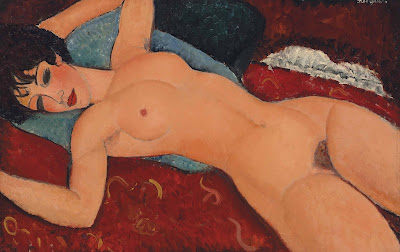 Record-high prices from the art auction world continued to astound people this year, even those of us who work in the art industry. Of course, this is in modern/contemporary art, where prices for a handful of artists from the past 140 years (mostly 20th-century) continue to garner often shocking prices in the millions and alter the landscape (no pun intended) in the valuation of art. For instance, in May of this year, Christie's set a new record bringing in for the first time over $1 billion in a single week of sales: $658.5 million from their postwar/contemporary sale and $705.9 million from their 20th-century sale, each a few days apart from one another. Then, in November, Christie's made news with the record-breaking sale of the painting you see above, Amedeo Modigliani's Nu Couché (Reclining Nude), 1917-18. This picture sold for $170.4 million (with fees) to Chinese collector Liu Yiqian, a former taxi-driver, now billionaire, with a private museum in Shanghai. This record-breaker has earned the painting the number 2 spot on the most expensive works ever sold at auction (a Picasso also sold this year as number 1). Now, I like Modigliani's work a lot, but this nude...not so much. These other Modigliani nudes at the Met Museum and the Courtauld (the second one of my favorite paintings of the nude) are far superior in their execution than this one. I also think Modigliani's portraits are hauntingly fantastic, such as this portrait of Paulette Jourdain that sold this year at Sotheby's for $42.8 million (with fees) from the collection of their former CEO A. Alfred Taubman (a highly controversial figure himself). This record-breaking sale of a Modigliani has now effectively escalated the overall appreciation of his entire oeuvre. That may not seem to be a bad thing, because he is a great modernist, but this escalation in value also has skewed the market for his work in a way that costs museums and private collectors more money to insure his art works in their collections. On the surface this may not seem like a big deal, but when museums want to organize exhibitions, it costs them more to ship and insure these paintings, and as a result these costs trickle down to the average museum-goer in the form of higher ticket prices, book and merchandise sale increases, and other costs. The impact factor of these auction sales go beyond what a wealthy Chinese collector is willing to pay for a particular work of art.

Here is my new list of the Top 5 Auction Sales of Works of Art, which is an update of my 2013 post on this with extracted information from sites such as theartwolf and Wikipedia. (Keep in mind that this list is specific to auction sales and does not consider private sales, the most expensive of which is now in the range of $300 million for Paul Gauguin's painting Nafea Faa Ipoipo [When Will You Marry?].) 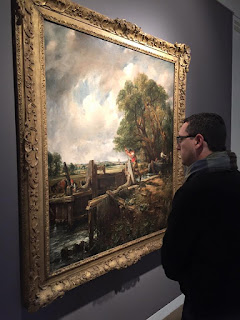 In the world of British art, the picture you see here is of one of the more significant sales this year. The picture (taken by AA) shows me examining John Constable's The Lock, ca. 1824-25, when we visited Sotheby's New York in November to see the exhibition of upcoming works for auction. No, we weren't in the market to purchase it, as its estimate was in the millions of pounds/dollars range. This particular painting was number 5 of 6 in a series of Constable's famous "Six-Footer" paintings, i.e. landscapes that were elevated to the status of history paintings, but lacking a narrative. His paintings changed the history of art from the 1820s on when he exhibited them, as they opened up a new appreciation for the natural landscape as a large-scale, viable subject for artists and collectors. Constable's painting sold at Sotheby's London for £9.1m or $13.7m (with fees). (Note that another version of this same subject actually holds the record for Constable at auction, selling in 2012 £22.4m or $35.2m.). The sale of this painting now means that only two more major works by him are left in private hands.

Also in British art, I was pleased to see that this work, Simeon Solomon's Priestess of Diana Offering Poppies, 1864, which has been on the market and in private sales over the years, sold for £43,750 or $65,800 this past week. This isn't a record for Solomon, as his 1871 oil painting Rabbi Holding the Scrolls of the Law sold for £142,400 or $280,460 in 2006, but this latest sale is a demonstrated strength in the market for Solomon's oeuvre overall. For an artist long-maligned because of his homosexual crimes, Solomon has come into his own as an important figure among the Pre-Raphaelite and Aesthetic artists of the Victorian period, and is now eagerly sought by collectors in this area. (You can see my Solomon blog posts here, and always remember to check the award-winning Simeon Solomon Research Archive which is co-managed by Carolyn Conroy and me.)

To wrap up this auction post, I must comment on what I consider to be one of the most bizarre sales of the year, another painting AA and I had the opportunity to see in person at Sotheby's: Carl Kahler's My Wife's Lovers, 1891. This was a commission to paint San Francisco socialite Kate Johnson's favorites cats from among her 350 of them. I am not making this up. The end result is mind-boggling painting to behold. It measures approximately 6 x 8 1/2 feet in size and is in an incredibly ornate frame. One can appreciate the attention to detail and emphasis on animal physiognomy, Kahler succeeding in capturing the characteristics of each individual cat. But the painting borders on the eccentric. The estimate price was $200,000-$300,000. It sold for $868,000 (with fees). All I keep thinking about this painting is that someone with a lot of empty wall space must really, really love cats. Here is Sotheby's video about the painting, which also shows you how popular in the press the picture was when it was completed almost 125 years ago.

Frankly, the video just made me think of Henri, ze French kitty with a serious case of ennui.