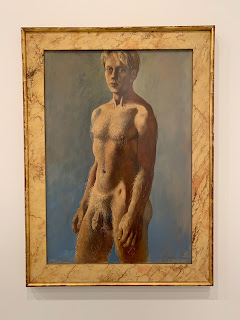 24 hours ago, I was in Chelsea to see two exhibitions: Jeff Miller's show "Through the Looking-Glass: Alter Egos & Others" at the Atlantic Gallery; and "The Young and Evil" curated by Jarrett Earnest at David Zwirner. Soon afterward, I posted on my Instagram account pictures showing installation views and object shots from both shows. Whenever I post on Instagram, the norm for me is about 50-60 likes. Occasionally, it goes up to the 80+, and I've had about 4 posts that were liked by over 100 people. Let's face it: despite some personal "fans" (you are reading this right now!), I'm not a social media phenomenon, nor have I ever aspired to be. So you can probably imagine my complete shock and surprise how--only 24 hours later--I now have over 1,300 likes on my Instagram post about the exhibition at David Zwirner. I am literally stunned by this and--dare I say--even a little disturbed by it. I said to AA at least twice today "post a picture of a painting of a naked man..." Clearly that has something to do with it. But there has to be something else going on. I wonder if it is some sort of algorithm, pushing the image higher in the search for people or coming up randomly on people's Instagram posts because friends-of-friends-of-friends are liking it, and it's growing exponentially as a result. I don't think my hashtags (e.g. #queerart #stonewall50 etc.) are that special, but maybe I'm wrong. It has occurred to me that perhaps the gallery is somehow actively pushing the feed, but I don't see how they could do that. In any case, it's all completely bizarre how over 1,300 people I have never met, who live everywhere in the world, are liking these pictures. A few have commented and asked questions, so I've helped identify the works and responded to them. Some have started following me now, which is how this is supposed to work I imagine, and I in turn have chosen to follow a few back.

What is fantastic about the exhibition (which has now closed--yesterday was the last day) is that it presents a number of pictures never published before and rarely, if ever, seen by the public, all depicting works of art by a group of gay male artists (and women close to them) who were all active in the 1930s and 1940s in New York City.  The artists on view include Paul Cadmus, Jared French, George Platt Lynes, George Tooker, and so on. The style of art is largely figurative, somewhat surrealist, frequently provocative (and unapologetically so), and using older painting techniques out of favor at the time (e.g. tempera paint). Ultimately, it presents an alternative canon of American art, and it challenges the modernist tendencies that lean towards abstraction and social realism--art movements almost completely dominated by heterosexual men, culminating in the mid-century, uber-macho-modernity of Abstract Expressionism (i.e. Jackson Pollock, Mark Rothko, etc.). One of the artists who has been underappreciated and clearly comes to the foreground in the show is the Russian-born artist Pavel Tchelitchew (1898-1957). The image you see above is by him: The Lion Boy, 1936-37, gouache on paper mounted onto canvas. The stark hyperrealism of the muscular, blonde youth whose mane-like hair bursts from his body even more strongly than that from his head is without a doubt incredibly startling to see. The fact that it is uncomfortable for some to even see it now, or the fact that so many others are enamored of it because of its eroticism, reinforces how unusual such images are in our society. Would anyone have reacted the same way if it was a painting of a nude woman with blonde hair? I doubt it. Even if it were a spectacular painting, I can't imagine that it would have generated over 1,300 likes just 24 hours after I had posted the picture. 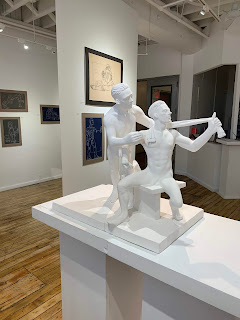 Going back to Jeff Miller's show, if you're in the NYC area, you should go see his show too before it closes next week. Like the other exhibition profiling gay male artists, Miller exhibits his own interpretation of the idealized male body. His drawings have a fascinating energy to them, and his hyperrealistic sculptures play with ideas of ego and superego in their doubling effect. So far, though, the post of his pictures on Instagram has only generated about 40 likes in 24 hours. The thing is, that is actually a great number! But when compared to the other post, it just demonstrates that there is something more going on that has to explain how the other post has literally shot through the social media roof.
Posted by bklynbiblio at 5:10 PM

And that "AA" is not Bronson. I didn't get to see the Zwirner show but it sure sounds fine from your description. It's not like Cadmus, French, Lynes, and Tooker are unseen but it's nice when stuff comes out of the back room or from private collections to be displayed. Whatever caused your numbers, it's for a good cause.